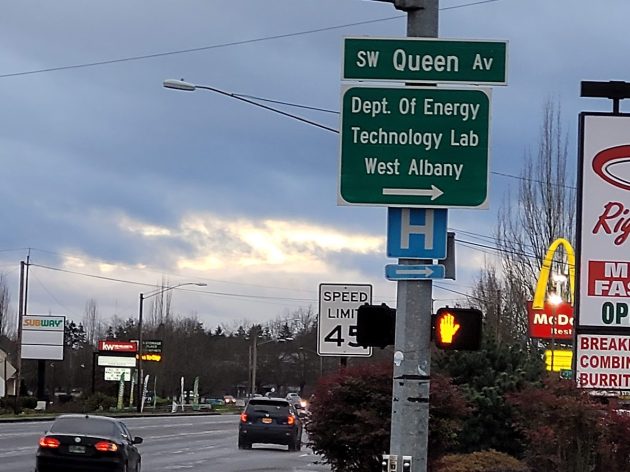 The road sign at Queen Avenue and Pacific Boulevard, photogaphed on Jan. 15, 2023.

In idle moments over the years, I’ve wondered how Queen Avenue in Albany got its name. Turns out I’m not the only one.

“Where did Queen St./Ave. get its name?” said an email that came last week.  It was signed “Bill in Corvallis.”

Nobody I ever asked that question had a definitive answer. But now that the City of Albany has called for bids to resurface Queen from the Calapooia River to Ferry Street, I’ve tried again to find out.

I still don’t know exactly why the street is named what it is, but I know a little more than I did before. Here’s what I learned.

The first mention I could find was from 1909, when the plat for the Hazelwood Addition was filed. The story in the “Albany Democrat” mentioned several street names that still exist such as Lincoln, Broadway and Hop, “with Queen at the corner leading towards the Calapooia bridge.”

A street map from 1936 shows Queen Street, from the corner of Broadway toward the river. At Broadway, Queen connects with an east-west route then named 15th Street. From Marion Street east, 15th Street becomes A Street on the map.

Street naming became an issue in October 1946, when city officials were reported to be discussing it with the Albany Jaycees. (Why the Jaycees, the story didn’t say.)

In February 1948, the Democrat-Herald reported that a plan for street signs and street names, worked out by a committee the year before, had been approved by the city engineer and the council.

“Included among the changes is the renaming of 15th Street Queen Avenue for its entire length, from the Calapooia River to Geary Street,” the paper said.

(It also said the name of Takena would become Cottage Street along its entire length from Queen to Ninth. Eventually, the opposite happened, so now it’s Takena on the whole street and Cottage is gone.)

There may be some confusion in the printed record about the timing and details. In connection with a related story here in 2019, Gordon Steffensmeier of the city engineering staff told me the ordinance making name changes didn’t pass until March 23, 1949.

To sum up, Queen Street existed in 1909, on the short track outside the west side of Albany. About 40 years later the name was extended east to Geary Street.

Later still, it was extended again once the street was built eastward, ending at Waverly.

In 1969, though, Queen was still in two pieces, with an undeveloped gap of two blocks west of Geary. Gus August of the Democrat-Herald reported this on July 24 that year after he took a ride in a Cessna 175 piloted by a city council member and took a photo from the air.

Which still leaves the source of the original name hidden in the mist of time. Let’s hazard a guess.

In the last part of the 19th century, Albany papers such as the Democrat and especially the weekly “Herald-Disseminator” were full of stories about the British royal house.

In May 1895, the “Albany Weekly Herald” observed Queen Victoria’s 76th birthday and noted that she had reigned for 58 years, “one of the greatest periods in the world’s history.”

“A Good Queen and Noble Woman,” the headline called her.

Victoria died in January 1901. Is it unreasonable to think that her devoted fans in Albany named a little road out of town for the departed queen? (hh)


7 responses to “Queen Avenue: In search of name’s origin”