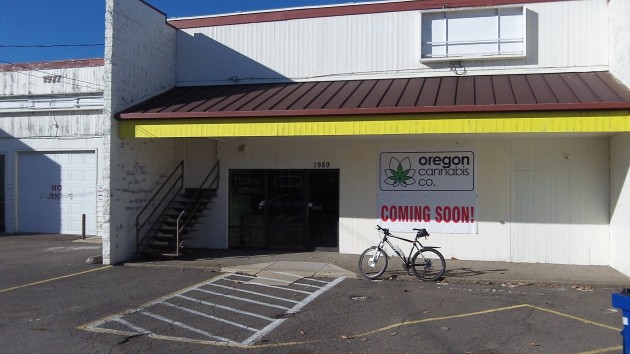 If it opens here, at Santiam and Pacific, this would be Albany’s sixth medical pot dispensary.

Rather than tumble from one marijuana discussion into the next, as it has been doing, the Albany City Council has decided to get organized on the issue. The council Wednesday agreed with a suggestion by City Attorney Jim Delapoer and Assistant City Attorney Sean Kidd.

The city lawyers recommended that they — meaning Kidd, for the most part — prepare a written list of options the council could consider regarding local marijuana regulation in light of Measure 91 and state laws passed since that initiative was approved. Kidd also wants the city staff to draft a map, presumably showing the sites of  medical marijuana dispensaries and where others might locate given the city’s and state’s limitations.

The council agreed to meet at 7:15 p.m. on Monday, Nov. 2, for a public work session to receive the options list, which is to be posted on the City of Albany website ahead of time, probably by the Friday before. Once the list of potential options and ramifications is presented, the council may then schedule a separate meeting to see if there are four votes for any of the choices

The council has already decided not to allow medical pot dispensaries — there are five in Albany — to sell recreational weed, as the state has alowed from this Oct. 1  till the end of 2016. That ban might be reconsidered, as two or three council members have suggested.

State law allows cities to ban recreational pot facilities and new medical dispensaries, as well as commercial grow sites, but in Albany such a ban would have to be referred to the voters in the 2016 general election. It would be in effect at least until then, and the state would not license new pot facilities in the city unless and until voters overturned the ban. Another option is to do nothing, which would open the way for recreational pot stores to apply for licenses and eventually get them where city zoning allows. (hh)

In this version of the story, I’ve fixed a typo in the date of the council meeting when the options are to be presented. (hh)


7 responses to “Pot: Council to get list of options”