Postscript: Why the hole was made so big 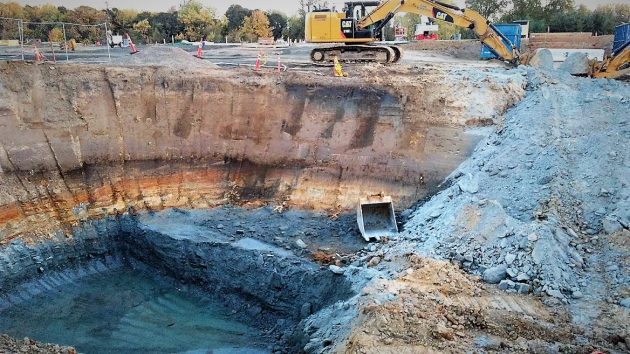 The deep excavation at the Oak Grove School construction site, the way it looked Sunday.

If you read Monday’s story behind the 25,000-gallon tank being installed at the new Oak Grove School in North Albany, you may have briefly wondered why the excavation for it was many times bigger than the tank.

On Tuesday I got a return call from David McKay, who oversees and manages the Albany school system’s bond-financed construction program, of which Oak Grove is a major part. He had been on vacation Monday, but on Tuesday he reached me while I was heading south on I-5. (Thanks to a no-hands car phone, no law was violated in the receiving of that call.)

McKay told me the hole in the ground at Oak Grove had to be many times bigger than the wastewater collection and holding tank for several reasons:

The tank has to rest on a thick bed of concrete over crushed rock. Then there has to be room to secure a system of steel cables to hold the tank down if the groundwater happens to rise.

Also, the hole was made as wide as it is for safety, to prevent cave-ins and protect workers below as they install the tank and its fittings.

This is more than anyone really wanted to know about a big tank and a hole in the ground. But when you’re on the road and have a website to write, you grab what you can, even a tidbit such as this. (hh)


6 responses to “Postscript: Why the hole was made so big”