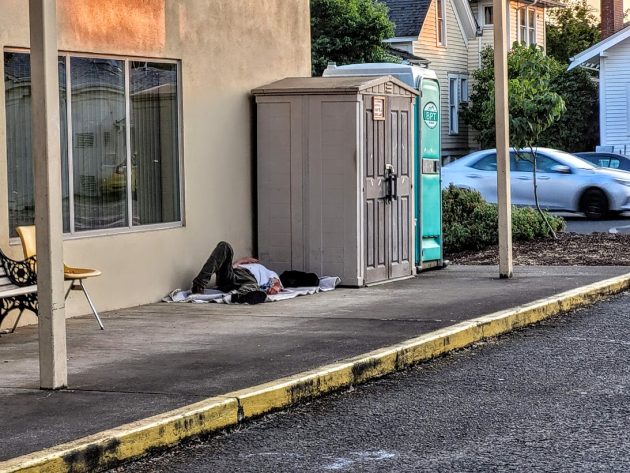 On Tuesday evening, a man sleeps near a storage unit and the portable toilet outside the First Christian Church on Washington Street.

The portable toilet outside First Christian Church in Albany was the focus once again as the city council engaged in another round of talk about it on Wednesday.

At issue was a proposed ordinance to permit the placement of portable toilets on private property under certain circumstances. Councilwoman Matilda Novak voted against the second reading of the measure’s title at the same meeting as the first. As provided by the city charter, this postponed the second reading until the next meeting.

To Novak, setting up a permit procedure for portable toilets and then having to enforce it is more trouble and may cause more expense than necessary.

To other council members and the city staff, the orinance is needed because without it, portable toilets are prohibited in Albany except at construction sites and special events.

Despite that apparent ban decreed by the municipal code, in March the council voted 5-1, with Marilyn Smith opposed, to allow First Christian to keep its porta-potty for another year. It also asked the staff to draft code language to allow this.

The proposed new law would continue to prohibit portables as an alterative to hooking up to the sewer service. It would make an exception for city parks, even though most parks could have and some do have standard restrooms.

As for other situations, the proposal would require permits good for 90 days to be issued by the city manager. Applications would have to be accompanied by a “site plan,” but Public Works Director Chris Bailey said a simple pencil drawing would suffice. Permits could be renewed for additional 90-day periods, but the permit fee — Bailey estimated about $30 — would be demanded only once.

Assuming the measure passes in August, this raises new questions about the portable at First Christian.

Would the council’s blanket one-year permit be superseded by the new restrictions? For instance, would the church have to apply for a new permit, and would it have to build a screen? Could that be done without intruding on the setback from the public right-of-way, which the ordinance also requires?

One side in this continuing saga is concerned that without explicit permit requirements in the code there could be an explosion of porta-potties all over town, something that no one wants.

The other side — Matilda Novak mostly —  just wants to let First Christian continue to do what it has done: provide a crucial human service to homeless people, especially those who partake of the church’s free meals on Thursday nights.

The council meets again on Aug. 8 and Aug. 10. We’ll see what happens with portable toilets then. (hh)