Population pressure’s up, but less so here 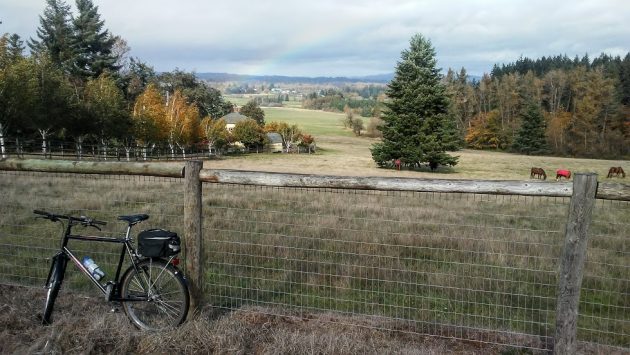 The view north from Palestine Road on Oct. 20: The Oregon population is rising elsewhere.

The latest population report from Portland State University gives us yet another reason to be glad about living in the mid-valley instead of the metropolitan hot spots of the state.

Oregon added about 41,000 people from 2018 to 2019, most of it from net migration, according to the estimates released last week by the university’s Population Research Center, bringing the total to 4,236,400 for an annual increase of 1 percent.

Nearly half the growth in numbers came in the metro counties around Portland: Multnomah and Washington, each with more than 7,000 new people, and Clackamas with nearly 4,000. Most of the rest was in Deschutes, Lane, and Marion counties with around 4,000 each, more or less.

By comparison, the estimated increases for Linn and Benton counties were modest, 975 for Linn and 770 for Benton, for an annual growth rate of a mere 0.8 percent, below the state average.

Corvallis, strangely enough, lost population over the year, according to the estimates. The Benton County seat went from 59,280 last year to 58,885 in 2019, a drop of 0.7 percent. Maybe the reported decline in OSU enrollment had something to do with that.

The 2019 estimates are open for review until they become official on Dec. 15. You can look at the details here.

There’s good news and bad in the numbers and the trends.

From the standpoint of politics, the left-leaning power centers in Oregon are getting stronger, meaning the decades-long trend in that direction will continue after it’s confirmed by the 2020 census and reflected in the redistricting a year or two after that.

From the standpoint of livability though, mid-valley residents have reason to be glad that the pressure of a growing population for more density and development is strongest in parts of the state other than here. (hh)


7 responses to “Population pressure’s up, but less so here”