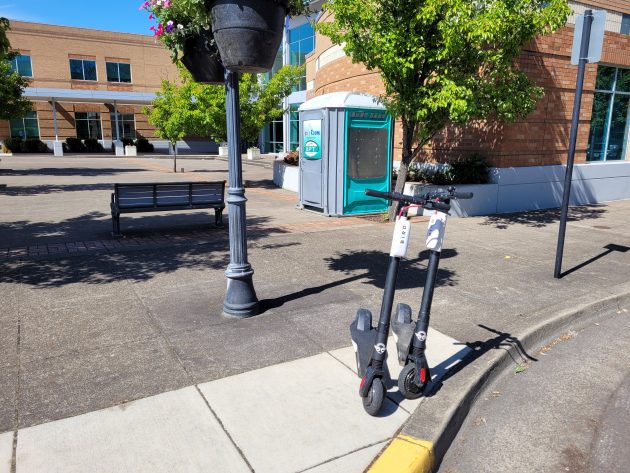 For the convenience of Farmers’ Market customers, and maybe scooter users too, a portable toilet is set up outside City Hall. This was on May 21.

Not many people took part in an online Albany poll on portable toilets. But of those who did, a majority said yes, Albany should “allow portable toilets on private property for public use.”

The Polco polling company ran the portable potty poll — call it a popo poll  if you want — for the city council, which will take up the results in a work session on July 25. The questions were designed by Kris Schendel, the code compliance officer attached to the police department.

The survey was online from April 26 till May 11. Someone asked me about the results, so I inquired.

City spokesman Matt Harrington told me Tuesday that 134 “certified Albany voters” took the survey. (I didn’t know being an Albany voter was a qualification. What if you are an Albany taxpayer? Did your answers count?)

Of the 134 people who took part, 77 or 57 percent answered yes to the main question, whether portables should be allowed.

Sixty respondents said portables should be allowed in residential neighborhoods, while 17 people said no to that question.

As for what would be a good period of time that portables should be allowed, 40 people picked “over six months.” Shorter time periods got a smattering of responses each.

But 15 people preferred “other” as a time period. The comments included “case by case” and “as long as they are maintained, no time limit.”

One person wrote: “As long as they want it there because it’s none of your business.”

The municipal code in Albany limits the temporary placement of portable toilets to special events and construction sites. It says nothing about the portables permanently deployed in city parks.

The city council recently granted the First Christian Church downtown permission to keep a portable toilet in place for another year. Anyone can use it, but it’s there mostly for the homeless people taking part in the church’s free meal program on Thursday nights.

At the time the council also said it would consider modifying the city code on portable loos.

“After the work session in July,” Harrington told me, “council may request more comprehensive outreach and/or additional surveying about this subject to get a larger sample size.” (hh)
Posted in: Commentary, News, Uncategorized
Tags: Albany council, Polco poll, portable toilets