Out on Pirtle Drive, there’s a new sight 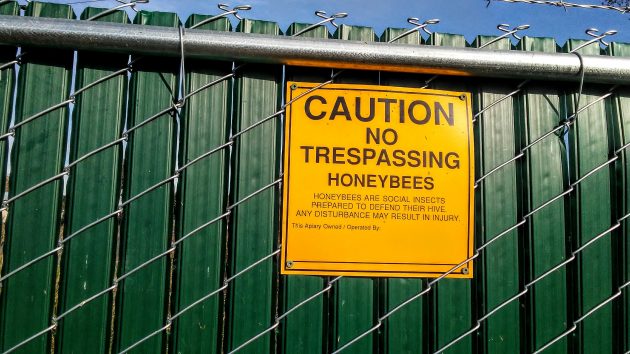 The message here can be summed up as “Don’t mess with the bees on the other side.”

It had been some time since the bike took me along Pirtle Drive in the farm country south of Albany. So until Friday I had not seen the long fence topped by barbed wire on the former industrial site where Dirk Olsen of Olsen Honey Farms has set up his apiary.

Why the fence, I wondered. The yellow warning signs explained.

Hundreds of hives were stored on the property. I couldn’t see them all from one of the open gates, and I didn’t count them, but there were lots and lots of them.

According to one online reference, “honeybee colonies consist of a single queen, hundreds of male drones and 20,000 to 80,000 female worker bees.” So it’s safe to say that if there were only 100 hives, there were 2-8 million bees on the other side that fence, each equipped to sting you if you get in its way.

You’d think this realization would be enough to keep people out and the barbed wire at the top was more or less wasted, particularly because a determined intruder without good sense, or unable to read the signs, could easily worm his way through the gaps between the fence and the ground.

Friday was a sunny day, and warm, the kind of day when bees apparently like to leave the hive and explore. Out on the road, a few were buzzing around my head, and I was beginning to wonder whether it would be wise on future rides, like the one below, to avoid that section of Pirtle Drive. And people in cars might want to keep their windows up.

The video shows you part of that long fence. Turn down the sound to mute the bike and road noise my camera picks up. (hh)

3 responses to “Out on Pirtle Drive, there’s a new sight”