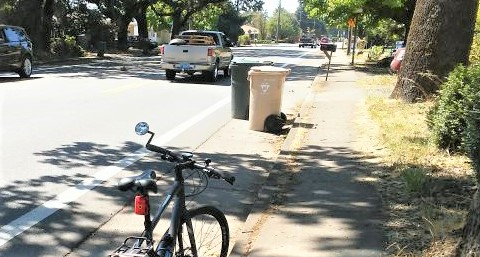 Here’s a photo from August 2019. Just where are trash cans supposed to go?

Throwing stuff away and having it hauled off used to be simple. Now it’s not exactly a science, but judging by Republic Service’s “2022 Residential Recycling, Yard Waste & Compost Guide,” it takes some study to do it right.

The guide just came in the mail to the disposal company’s Albany customers. If you got one, you know what I mean. There are plenty of dos and don’ts in the departments of recycling, yard waste, trash, and hazardous waste. There’s also a fun fact or two.

For example, you’re not to discard “radioactive materials.” Stands to reason. But “including smoke alarms”?  Who knew?

The guide reminds us that Republic will pick up Christmas trees left at the curb on trash day for two weeks after Christmas. “Trees should be no larger than 6″ in diameter.” Those would be pretty tiny trees. Oh, maybe they meant the diameter of the trunk.

There is  also the matter of where to put out the carts on trash day. “Do not,” the guide says, “block cars, bike lanes, mailboxes, sidewalks or driveways.”

Some Albany streets have both bike lanes and narrow sidewalks. Salem Avenue, shown in the photo above from three years ago, is an example. People on those streets have no choice. Their carts block either the bike lane or the walk.

To minimize problems, the guide says, “Remove carts as soon as possible after collection.” Easier said than done unless you stand by all day at the window until the trucks come by. Some weeks they come at the crack of dawn, and other weeks not till the afternoon.

This drawing of the recommended cart placement had me going for a second: 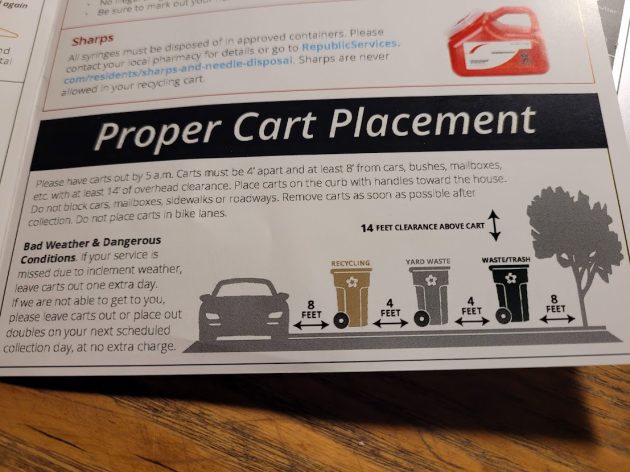 The frontal view of the car suggests a row of carts stretching from the planter strip into the middle of the street. Oh wait, no. They mean ALONG the street. Of course.

Actually, this trash and recycling guide is a useful reminder of good practices when it comes to waste disposal. Read it if you haven’t already.

It sounds like the Middle Ages, though it was only 40-some years ago. Just imagine how much that would cost today. (hh)