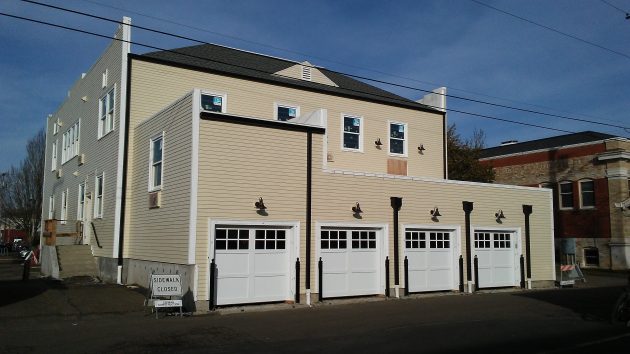 The rear of the renovated Fortmiller Building gleams in the winter sunshine on Monday, Jan. 16.

The city-supported renovation of the Fortmiller Building at 420 Third Ave. S.W. looks nearly complete, at least from the outside and from the back, and on Wednesday the advisory board of the Central Albany Revitalization Area plans to take a look inside.

The CARA board scheduled a tour of the building before its 5:15 p.m. meeting on Jan. 18 at City Hall.

In March 2014, the CARA urban renewal board authorized $336,000 in aid toward Scott Lepman’s project, which included renovation of the bighted building and was estimated at the time to total $1.6 million in cost. Built in 1930 as funeral home, the structure was to be fixed up as two offices and six apartments. In addition, Lepman planned to build townhouses next door, but then it was discovered that this couldn’t be done under the city’s development code. Instead, Lepman agreed to build units at 224 and 234 Third Ave. S.E.

Under a revised set if deadlines, the Fortmiller job was to be finished at the end of this month, and the new townhouses on East Third by July 31, 2018. According to the CARA board agenda for Wednesday, Lepman is asking for an extension until the end of 2018. The city staff is recommending approval.

On Monday afternoon, the sounds of construction came from inside the Fortmiller site. Much of the exterior appears to be just about done, though the front still needs finishing.

Meanwhile, Lepman’s company, Glorietta Bay LLC, also owns two other big downtown buildings in need of fixing up. One is the former post office at Second and Broadalbin, which later served as Albany’s city hall and police station. The other is a 19-unit apartment house at 222 East Second, which Lepman told me Last August he planned to restore. (hh)