On Wells Fargo site, a setback for CARA 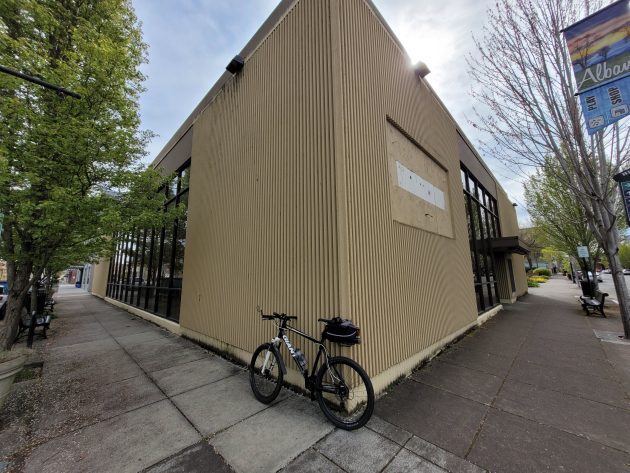 Leaning a bike against it is about all the former Wells Fargo branch downtown is good for these days.

Hopes of rebuilding the former Wells Fargo Bank branch in downtown Albany by adding three floors of apartments have been dashed by the rising cost of construction.

That’s the gist of the news the city council got today. It came in the form of a memo attached to the agenda of a scheduled Monday meeting of the Albany Revitalization Agency or ARA.

The ARA is composed of the council and governs the city’s urban renewal district or CARA.

The ARA agreed almost a year ago, in May 2021, to lend Gerding Builders $900,000 to buy the former Wells Fargo building and grant the company $2 million toward the cost of rebuilding it, a cost then estimated at $10 million or more.

In September, the ARA was told the project was still  being pursued.

In the memo for the upcoming ARA meeting, following the council’s work session on April 25, economic development manager Seth Sherry says Gerding can’t go ahead because by this spring construction costs for the project had risen nearly 30 percent. The project was already “thin” in terms of financial feasibility, and the cost increase made it uneconomical.

This is the second recent setback for the CARA urban renewal program. The ARA this month rejected all four bids for what was intended as the first phase of CARA’s riverfront redevelopment project, cancelling construction plans this year.

The city of Albany bought the Wells Fargo property for $1.5 million in January 2019 after the bank closed the branch the summer before. Officials hoped to find someone to buy and redevelop the place. But the city still owns it.

Linn County at one point offered to buy the former bank property as a possible location for county offices, but the city declined. Now it looks like things are back to square one. (hh)


10 responses to “On Wells Fargo site, a setback for CARA”