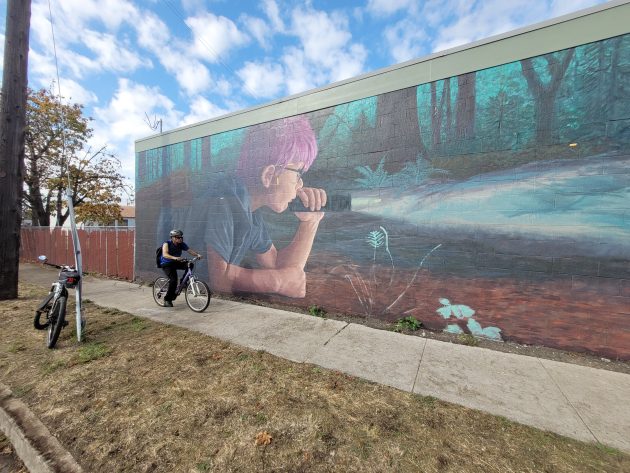 A man on a bike passes the new mural in the 700 block of Southeast Second Avenue last week.

For the past few days I had been been hoping to catch up with the artist who created a new mural on Second Avenue in Albany. And late on Tuesday I did.

The artist is Eileen Hinckle of Corvallis, and her new artwork covers the entire street-facing wall of an old storage building at 765 Second Ave. S.E.

In 2020, Hinckle completed a mural on another wall of the same building, facing the railroad track running past it. That one shows the face of a young woman with an expression of surprise or exclamation.

Next, the artist created a mural at Reptopia, a pet store at Pacific Boulevard and Hill Street. Later, she decorated the facade of the new FISH charity office on Second Avenue at Main Street.

Joe Katon, the owner of the building on Second at the railroad track, told me on the phone Tuesday that the artist had contacted him after she saw those blank walls. She volunteered to do the art, he said, and he offered to help with materials.

By email I had asked Eileen to explain a couple of things about the image in her latest mural.

“The child is exploring the forest with a flashlight at dusk,”she told me. But whether it represents an actual person, she preferred “to keep that a mystery.”

The figure in the mural, she added, is “a representation of any person exploring dark or unknown places.”

Across Second Avenue, at Cool’s Feed and Pet Supply, they told me Saturday they thought Hinckle was not finished with this work. And the artist confirmed it in the email she sent me.

“I’ll aim to finish it mid-November,” she wrote. But obviously, whether she can do so will depend on the weather.

I asked her what prompted her to launch this effort. “I received some funding from the Oregon Arts Commission,” she replied, “and that is what allowed me to embark on this project.”

The building and the parcel it sits on were formerly owned by the Union Pacific Railroad. Katon, the former owner of Katon Precision Machining on First Avenue, bought the property from the railroad. He said the building on the corner wasn’t used for anything but storage.

Across the lot, at the Katon machine shop on First, new owner Alex Poff and the employees have seen the artist at work, off and on. To help her reach the top of the wall, they have also (as I understand it) lent her a lift. (hh) 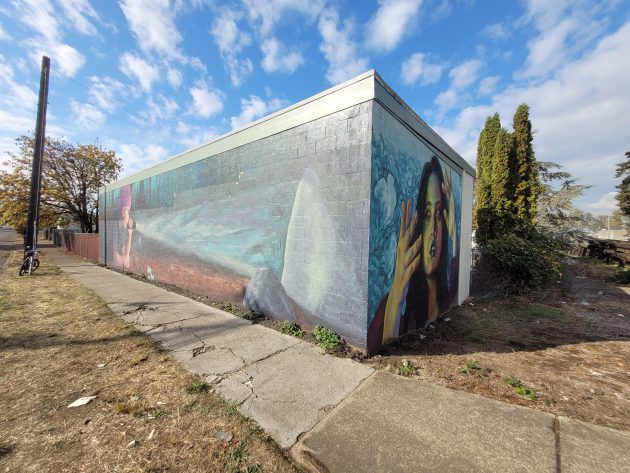 Eileen Hinckle’s two-year-old mural on the right, new one on the left. 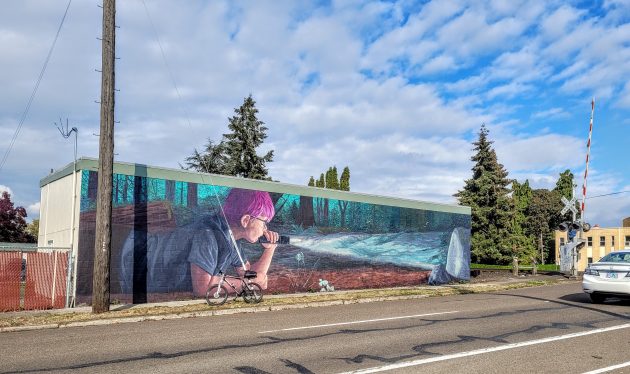 The whole thing as seen from across Second Avenue on Oct. 29.


6 responses to “On Second Avenue, blank wall now has art”