Obama, the climate and cheese 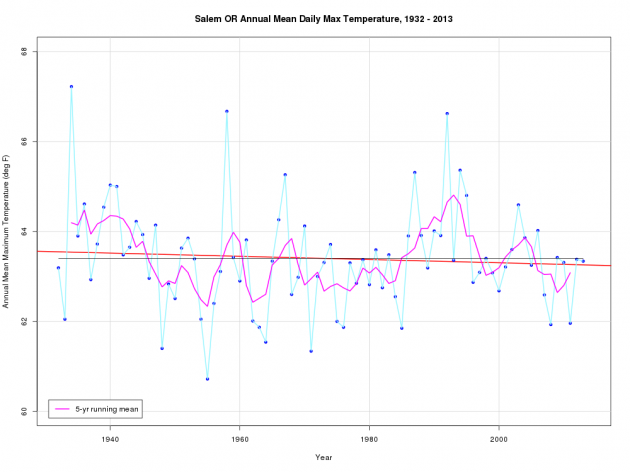 You’d expect Salem air to keep getting hotter, but evidently it hasn’t happened.

In Anaheim over the weekend, President Obama gave a commencement address that illustrates his penchant for loose talk. When you don’t or can’t tackle real problems — thousands of children walking across from Mexico so the Border Patrol will take care of them, Islamist terror brigades taking over Iraq, the government failing to do its duty to many veterans who are ill — talk about something else. Talk about climate change, for instance, and then try to mislead by claiming, as Obama did, that denying climate change is like arguing the moon is made of cheese.

First, no sane person denies “climate change.” The climate obviously changes over time. Everybody knows it.

But here is Obama’s cheese analogy: “It’s pretty rare that you’ll encounter somebody who says the problem you’re trying to solve simply doesn’t exist. When President Kennedy set us on a course to the moon, there were a number of people who made a serious case that it wouldn’t be worth it. But nobody ignored the science. I don’t remember anybody saying the moon wasn’t there or that it was made of cheese.”

Yes, pretty clever. Maybe the graduates at UC Irvine were impressed, but not if they were halfway awake.

Shooting for the moon in the 1960s was an engineering challenge based on the laws of physics, and its aim was not to transform America or to change how people live. The campaign to stop man-made climate change is an undertaking of a completely different sort.

When physicists, chemists or other scientists point out that temperature measurements don’t bear out the predictions of climate models, they are denounced or fired. When research produces evidence that fails to support global warming orthodoxy, it is ridiculed or suppressed.

That is the opposite of how science should work, and it’s the opposite if how America’s space program worked. When the early rockets blew up, the builders improved the designs and built better ones. But Obama either doesn’t know or doesn’t care that the climate models published by the International Panel on Climate Change have failed.

The models are based on the notion that as carbon dioxide increases, the atmosphere will keep heating up. Well, CO2 has kept rising, but the predicted warming has not kept pace.

That suggests the models are wrong or at least flawed. But if the models are wrong, then the drive to phase out the use of coal is unnecessary at best and economically harmful at worst. Obama and his followers in the global warming camp cannot bring themselves to admit that, or to support the search for other causes of observed climate fluctuations. So who’s denying reality now? (hh)

4 responses to “Obama, the climate and cheese”