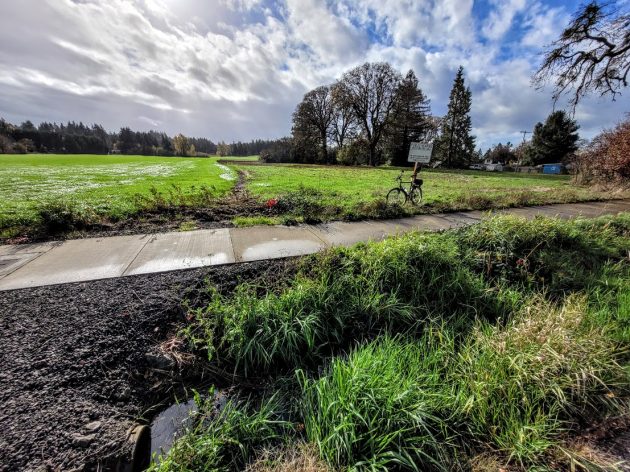 The green field behind the bike leaning on the “public hearing” sign on Gibson Hill Road has been approved for a 23-lot subdivision.

In what was pretty much a formality, the Albany Planning Commission has approved a 22-unit apartment complex on Southeast Salem Avenue and a 23-lot subdivision on Northwest Gibson Hill Road.

With conditions set by the planning staff and accepted by the applicants, both projects meet all the requirements of their respective zoning districts and the city’s development code. So there was no question that the planning commission would give them the green light, which it did, unanimously, in a Zoom meeting Monday night.

The so-called Riverwood Crossing subdivision is at 3118 Gibson Hill Road N.W., on the south side of the street. The owners of the 7.47-acre field are a family living in Granite Bay, Calif., a town on Folsom Lake near Sacramento.

The tentative plat approved by the commission calls for felling eight trees. The applicants have bought credits in a “wetlands bank” to compensate for destruction of wetlands when the land is developed. Storm water from the sloping land will be routed through a drainage system on the east side and held in a detention tank before being released to the ditch along Gibson Hill.

That much of North Albany’s open fields would eventually be covered by housing or pavement was made inevitable when the district was annexed by Albany in 1991. Riverwood Crossing, which is to be developed in two phases, is a step in that process.

At Monday’s public hearing on the subdivision, no one from the public spoke.

The hearing on the other project approved by the commission, the 22 apartments behind a house at 2941 Salem Ave. S.E., drew one comment from a neighbor across Salem Avenue. He worried about more traffic being added to the already busy thoroughfare.

The owner of the site, including the house fronting Salem, lives in Keizer. As part of the approval, the commission separated the house from the rest of the 1.46-acre site and also reduced the required buffering from the property to the east, the Wright Prototype machine shop.

If you’re interested in more details on these land-use applications, you can look them up on the planning commission’s agenda, which is available here. (hh)


8 responses to “No controversy: Two developments get city’s OK”