Moving that church: Is there no alternative? 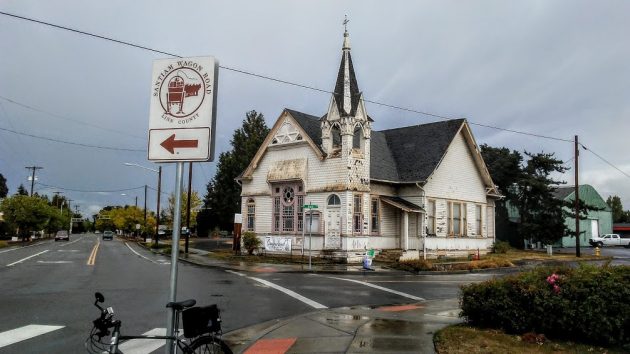 The church is to be moved down Santiam Road, left, just past the rail crossing in the distance.

The Albany city planning staff has concluded that there’s no “prudent or feasible” alternative to the proposed move of the historic Cumberland Church. Really?

The conclusion that there’s no good alternative is the main point of the staff report to the Albany Landmarks Commission, which on Wednesday (Oct. 7) will consider authorizing the moving of the building from 401 Main St., where it’s been since 1892, to 520 Pine Street, less than a quarter-mile down Santiam Road.

A lot of planning and discussion have gone into this project, and the city council has encouraged the move because it wants to get rid of this millstone, so there’s no reason to doubt that Landmarks will give its OK.

Still, is it true that there’s no prudent or feasible alternative?

The building should be preserved as an artifact of Albany’s — albeit relatively short — architectural and cultural history. By why can’t it be restored and preserved where it sits, in the place where its history is real, instead of being moved away from its historic site?

“The property at 401 Main Street SE has a limited number of available uses due to site constraints and required improvements,” the staff report asserts. There’s hardly any room for parking, is what that means. But so what? People have been gathering in that building for much of the last century, and the parking situation has been the same.

The staff report cites an estimate of a few years ago that restoring the church on site would cost $300,000. That’s a lot, but not nearly as much as the more than $1 million it is estimated to cost to move the church and turn it into an event center at the Pine Street address.

If restored in place, the old church could continue to host events and serve as a source of community pride in the Willamette Neighborhood the same as it has for 128 years, and at less cost in money and time. (hh)

22 responses to “Moving that church: Is there no alternative?”