Looking up at signals, and here’s why 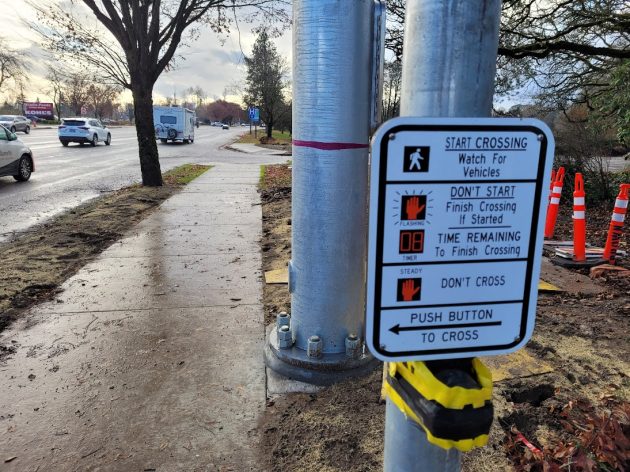 Instructions for when to cross the street, posted at a new signal post at Pacific Boulevard and Albany Avenue (shown on Nov. 30).

There was a reason I parked at Waverly Park and started walking around, craning my neck and pointing my phone at the new signal installations on Pacific Boulevard, at Albany Avenue on one side and Airport Road on the other.

The reason? I was looking for cameras, somewhere up there among the new signal arms, wiring and the still-to-be-activated lights.

And why was I trying to find cameras? Because a reader thought there were some there.

Sensitive about traffic cameras after getting a ticket from a red-light camera at Queen Avenue and Geary, this reader wondered whether new red-light cameras had been added to the signals ODOT installed at two intersections: Pacific and Airport, and Santiam and Waverly.

The reader thought she had seen new cameras at those places.

Actually, no new red-light cameras have been authorized in Albany, either by ODOT or the city council.  But I went to check anyway. And I didn’t see anything that looked at all like the two sets of red-light cameras that have been operating for years at Geary and Queen.

An inquiry with ODOT, though, produced a surprise: Apparently there are cameras there after all.

“They are pedestrian detection cameras,” the department’s Angela Beers-Seydel told me. “I’ve asked how they work – and hope to hear soon.”

So, another trip out on Pacific. I still couldn’t see anything that looked like an obvious camera, except for one little black blob on a signal arm with a wire coming out of it. 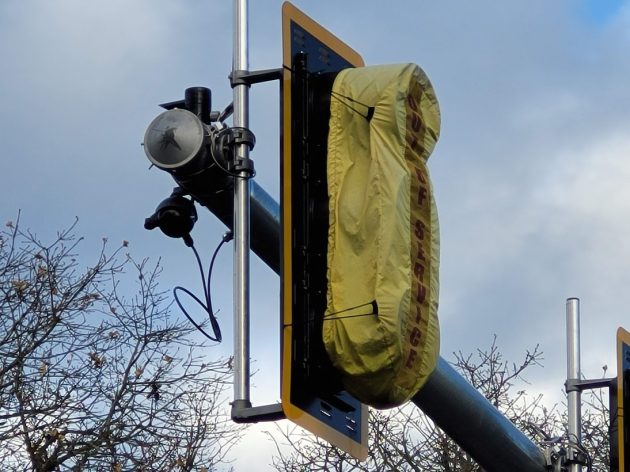 That little black blob seems to look where I, a pedestrian, would stand if I planned to cross Albany Avenue.

Long story short: I’ll wait for more information from ODOT, including perhaps a likely date when the replacement signals, still covered by yellow shrouds, will be turned on. And when the rest of the intersection work will be complete.

In the meantime there’s one thing we can be sure of: At these two intersections, on Pacific and Santiam, red-light cameras are not among the things we’ll have to worry about. (hh)


6 responses to “Looking up at signals, and here’s why”