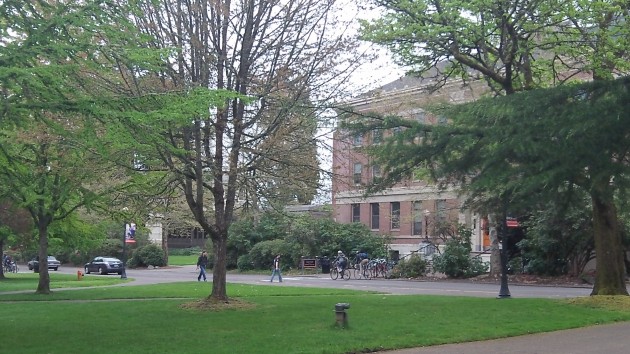 On the campus at Oregon State University in Corvallis.

The news about the latest price hikes at Oregon State University makes one wish for a radical innovation in higher education. This would be the creation of a bare-bones and no-frills system to educate and train all those interested, not just those who can afford it or are willing to indebt themselves for life.

The OSU trustees on Thursday approved increases that put the price of undergraduate studies at $10,366 per year, meaning three terms of the 2016-17 school year. That includes tuition of $8,715 and mandatory fees of $1,651. It does not, of course, include living costs for a year.

OSU says the University of Oregon will be even more expensive, though according to a report by the American Association of University Professors, for the current year the U of O costs slightly less.

In any case, running a big university like those in Corvallis and Eugene no doubt is an expensive proposition. OSU reports annual revenues and expenses of more than $1 billion in fiscal 2015. Of that, enrollment fees made up $347 million.

An analysis of comparable institutions done by AAUP in February showed that Oregon State had 38 administrators making more than $200,000 each. It had another 62 who were paid between $150,000 and $200,000 each. Compared to that, the average pay of a full professor was just under $115,000, according to the faculty group.

No doubt all these people do something important. My question is whether all of it is necessary so that thousands of young people can learn, as quickly as possible, what our country needs them to know in science, technology and the humanities.

In 2014, OSU and 10 similar institutions formed what they call the University Innovation Alliance with the goal of helping low-income and first-generation students complete their degrees. (The alliance’s executive director is on the OSU payroll at $192,036.)

One innovation they might want to try: Structure study programs so that reasonably motivated high school graduates can earn a bachelor’s degree in three years – it usually takes at least four and often more. This would make degrees less expensive, especially if these innovative colleges also succeeded in lowering their administrative overhead and then keeping it down. (hh)