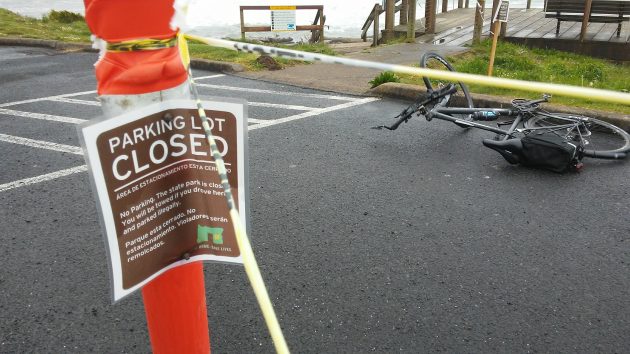 The coastal wind blew my bike down. Hope the towing threat applies only to motor vehicles.

The beaches closest to Albany on the central coast were devoid of people Wednesday, probably because it rained but also because the access points controlled by the state parks department remained officially closed.

On Tuesday the state announced that parks, trails and beach access points, closed since March 23, would remain closed beyond May 8, which apparently had been the target date for opening them up. Now they’re talking extending the closures for the rest of May. 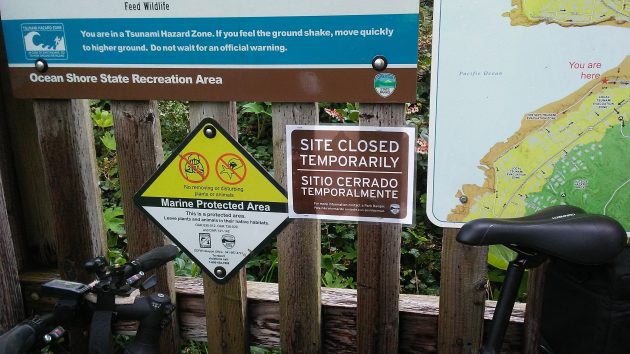 The beaches themselves are open, but what good does that do when you can’t get to them? And posting the waysides and parks to reach them as “closed” makes no sense because it doesn’t promote the social distancing we’re supposed to observe. It does the opposite, keeping people crammed together wherever else they go to get outside, or to shop. 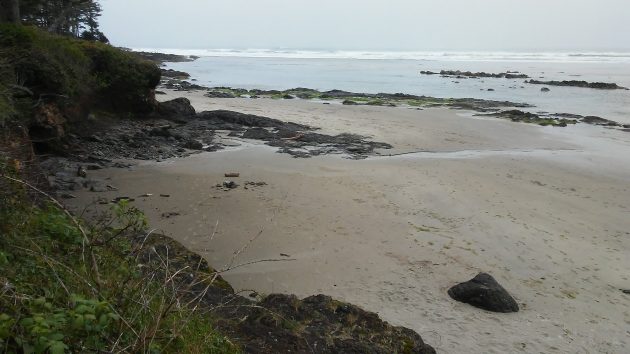 The beach in Yachats was even more empty Wednesday than usual.

Keeping our distance from other people is nowhere more easily done than on Oregon beaches, which as we all know (and sometimes regret, remembering our youth) bear no resemblance to the sun-drenched fleshpots of Huntington Beach, or even Zuma in the fog.

Officials have roped off popular parking spots on the coast, where once you would have people sitting in their cars staring at the surf, for relaxation perhaps, or maybe just to get away from their troubles for an hour or so.

Instead of discouraging trips to the coast, the governor and her helpers should and could have told people in the valley something like this:

“In the interest of social distancing to keep the virus from spreading, get in your car and take a drive to the coast. We need the gas tax. When you get there, grab some take-out where available. The restaurants that are open need the business.

“Then go sit in your rig and watch the gulls and the waves. When you’re done, how about a long walk on the nearest beach. It will do you good. And then, get back in the car, buy some gas if you need it and drive back home. Remember, without enough gas tax money ODOT can’t fix roads.”

If it’s OK to crowd into a supermarket to fend off starvation it should be even more OK to access a wide-open beach for your enjoyment or mental health. Which is kind of what I’m trying to get across in the video below. (hh)