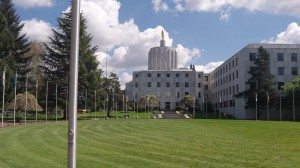 Legislators will meet again in early 2014. Until then we can relax.

We can breathe a little easier now. The legislature has adjourned, and the damage has been relatively minor.

Lawmakers convened in January, started work in February and called it quits on Monday, just five days before the constitutional deadline. During all that time they allocated more money to schools and various other programs, but they didn’t increase tax rates. A tax bill that would have hit senior citizens with big medical expenses did not get through, even though the Democrats pushed for it hard.

Another bad idea that also died, barely, was automatic voter registration of every citizen with a license to drive. Among the other proposals that didn’t make it was a series of bills to harass or penalize the owners or buyers of guns.

Lawmakers did pass bills to allow illegal immigrants to get a driving permit and to pay in-state tuition at the state universities if they are Oregon high school graduates. That was a matter of fairness and practicality. Senate President Peter Courtney got his wish for bigger fines for cell-phone use while driving, but not the thousand bucks he wanted per offense.

As usual, the House passed but the Senate killed a bill to allow private hunters to chase cougars with dogs. But as far as I can see, lawmakers enacted no big ideas to help fire up our economy to yield more jobs. So on the most important issue of all, they don’t get a passing grade. (hh)