Learned something of our (very) distant past 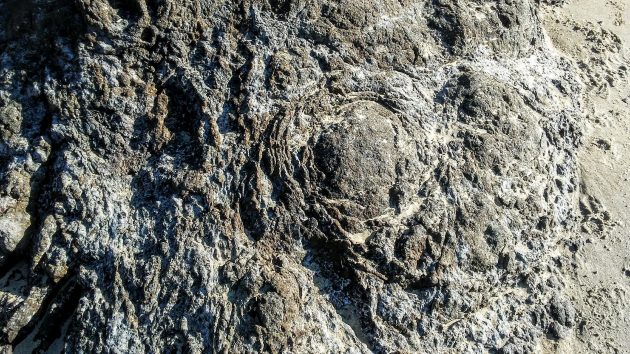 This petrified lava bubble is about a foot across and older than you’d probably think.

Walking back from the beach on the central Oregon coast, I look down and see the rock formation above. Looks like the kind of bubble that burbles up when really thick soup starts boiling on the stove, doesn’t it?

That’s lava, obviously. But how come? What’s lava doing here when Oregon’s volcanoes are in the Cascades, more than a hundred miles to the east?

Puzzled, I looked it up and quickly realized how little I knew. The first thing that Google served up was a website of the Oregon Department of Geology and Minerals Industries.  And that’s all I needed.

DOGAMI (remember, spelled backwards it’s “I’m a god”) has published and put online “Oregon: A Geologic History.” You can find the whole thing, starting with the introduction, here. It begins with plate tectonics, the shifting of big chunks of the Earth’s crust.

Section 7 is what interests us here. “Coast Range Volcanoes” is the heading.

It’s short and you should read it. In summary, though, between 45 and 36 million years ago, the northwest corner of Oregon drifted across a “hot spot” in the Earth’s crust, which caused a vast amount of volcanic activity in this part of the world, including the very spot I was walking to get back from the beach.

The lava flows and other rock formations of the central Oregon coast, including Cape Perpetua, are the results of all that geologic turmoil eons ago.

Learned something today, so as they say, the day was not a total loss. (hh) 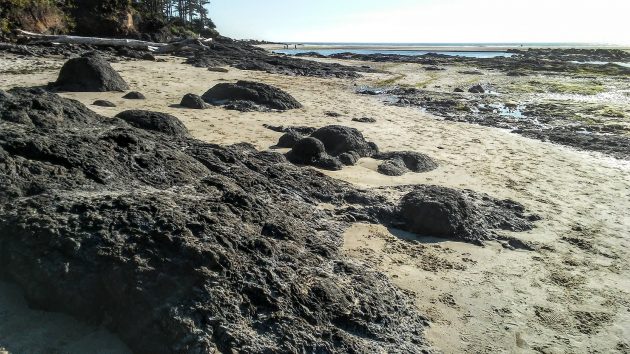 Looking south along the coast from the (at least) 36-million-year-old lava bubble.


5 responses to “Learned something of our (very) distant past”