Just wondering — why no crossing arms 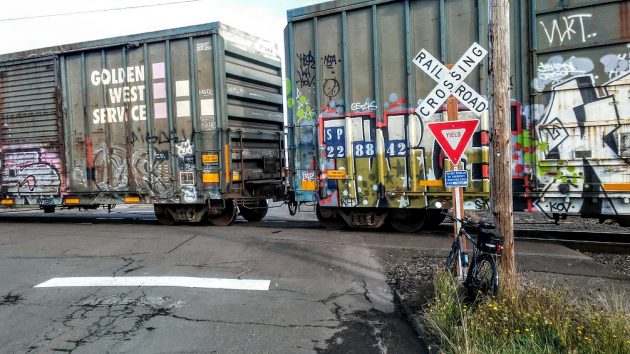 A Portland & Western freight creeps across Sixth Avenue on Oct. 14.

On a leisurely bike ride through old Albany the other day, I noticed something that wasn’t there. Where the Portland & Western Railroad crosses Sixth Avenue, there are no warning lights, bells or arms that come down when a train comes through.

This seems noteworthy because there are full sets of crossing protections– lights, bells and crossing arms — where the same track crosses the other numbered streets, from Second Avenue to Fifth.

How come there are no arms or lights or bells at Sixth? Albany’s city transportation expert, Ron Irish, thinks it may have to do with various criteria — including traffic volume and train speed — and the way crossing protections used to be paid for with federal money routed through the state, a funding stream that has dried up.

Now, he says, ODOT-Rail can require crossing protection in connection with land developments, and there there have been none that would affect the crossing at Sixth.

This crossing is on one of the curved arms of the wye that connects the Toledo Branch (the track that heads through Corvallis and Philomath) with the Union Pacific line in Albany. The curve is close to the entrance to the Albany yard, and the trains coming around that way are very slow, not much faster than a brisk walk.

This you can see below, in the few seconds of video taken on Oct. 14 before the train stopped.

Another odd thing came to mind when I shot that video. I vaguely remember a story we ran in the Democrat-Herald a long time ago, maybe 30 years ago or more. The story was about the house on the left of that video, and in the shot below, getting clipped by something on a passing train. 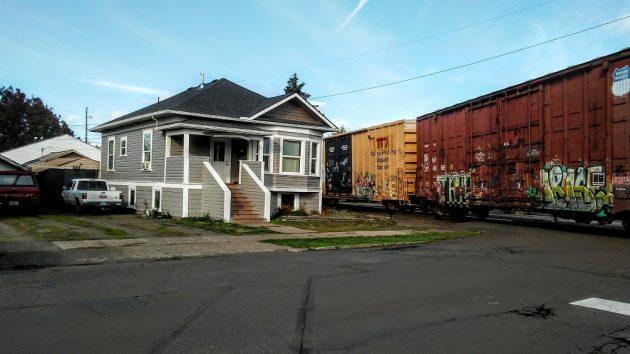 I don’t remember the details, but it must have been that a load had shifted. The track, though close to the building, is not close enough for trains to routinely endanger the house.

That house, at 739 Sixth Ave. S.E., has recently been refurbished, as you can see. It forms the southeastern corner of the Hackleman Historic District. For the exterior improvements the Corvallis real estate firm that owns it had to get the OK of the Albany Landmarks Commission, and they got it on June 3.

After I stopped the bike on Sixth to watch the PNWR train come to a slow stop, I rode one block north along the narrow sidewalk between the house and the track. I wanted to confirm that the usual crossing protections are in place at Fifth. And as you can see below, they are. (hh) 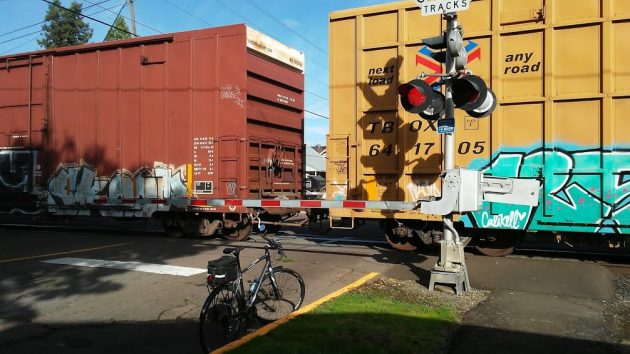 
13 responses to “Just wondering — why no crossing arms”