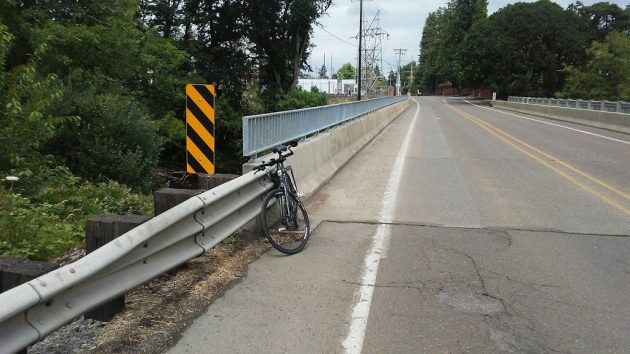 The addition of a metal railing was meant to meet OSHA height requirements for worker safety.

Crossing the Calapooia River on that Albany bridge above takes a couple of seconds and is nothing remarkable. But if you’re on a bike, you may notice something new.

What I noticed on July 10 was that a steel top had been added to the concrete barrier that lines the bridge’s downstream side. I wondered why.

The answer came in the form of a note from Linn County Roadmaster Darrin Lane, passed along by Commissioner Roger Nyquist: “The railing was removed from another bridge a few years ago because of a sight distance issue. Our bridge crew added it to this bridge because they frequently work in the vicinity of the railing during winter months and OSHA requires a safety rail higher than the existing concrete rail.”

So, another question: How high is that railing now? Next day, I packed a tape measure and checked. It’s a hair above 54 inches. The concrete barrier alone measures about 32 inches, and the metal adds 22.

Next question: What exactly is required for worker safety? In 2016, Oregon OSHA published a pamphlet,”Fall Protection for Construction Activities.” There it says, “The top rail of a guard rail must be 42 inches (plus or minues 3 inches) above the walking/working surface.” It must also, by the way, withstand a force of 200 pounds.

Various other online sources also mention 42 inches as the minimum height for pedestrian railings on bridges.

Which brought up one final question: What exactly should we call this bridge? The city of Albany’s official street map says the bridge is on Riverside Drive. But Google Maps says Queen Avenue, and the post office shows the addresses of properties adjacent to the bridge on the city side as being on Queen.

The Calapooia marks the city limits. So maybe half the span is the Queen Avenue Bridge, and the other half the Riverside Drive Bridge.

See the complications you run into when you wonder about stuff? But at least now we know how high a bridge railing should be. (hh) 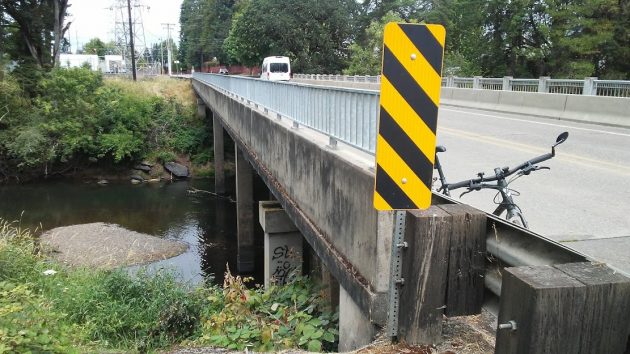 The stream down there, the mighty Calapooia, marks the Albany city limits.


8 responses to “Just crossing a bridge leads to questions”