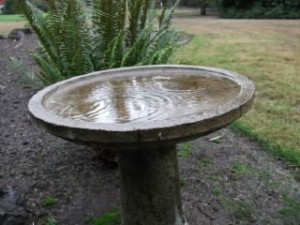 A cold bath for birds

A cold weather front was whipping through the mid-valley on Tuesday afternoon, just as the public television program Frontline was preparing to broadcast a program on global warming titled “Climate of Doubt.”

The reason there is a climate of doubt on this issue is not propaganda. It’s not the activities of various skeptics, who for a while now have been derided by their critics as “deniers.” The reason for doubt is that the public does not see any noticeable warming taking place.

Tuesday afternoon in the mid-valley, for instance, was just an ordinary day in October near the 45th parallel. We live in a very temperate zone of the planet. In western Europe, we share the same latitude as the south of France and the north end of the Adriaric Sea. And on Tuesday afternoon, we had a temperature of 48 degrees and a cold rain being whipped sideways by blustery wind.

In the media we are often told that our weather has warmed up, that the last decade was the warmest on record. But to news consumers, that’s you and me, it doesn’t feel any warmer. And on days like Tuesday, it seems like things have actually gotten colder earlier in the fall than before.

Human impressions should not count in this debate. What matters is not what people feel but what is shown to be true by precise measurements over the years. After all, people can’t imagine or see the reality of nuclear physics either, and yet we have seen that hydrogen bombs actually go off.

The trouble with climate science is that it is essentially about weather. And weather is what we all experience every time we are outdoors. So no matter how many scientists claim that mankind is making the world a little warmer, we don’t believe it when we shiver in October and have to crank the thermostat up. (hh)