Last week, somebody went across the lowered gates at an Albany railroad crossing and lost his life, and people were shaking their heads why anyone would ignore all the warnings at grade crossings. And then I came across this today: Gates, flashing lights and bells being activated at the Main Street crossing without a train anywhere in sight.

Going north on Main, I had just crossed the tracks on my bike when the lights started flashing, the bells went off and the gates came down. Cars stopped, of course, as they should, on both sides of the crossing. I had not seen a train approaching from either direction, so I turned around to see what was going on.

Nothing was going on. The gates stayed down about a minute or two, then they went up again and traffic resumed its normal flow. I didn’t see any repair work going on nearby, and I don’t know what else might prompt automatic crossing protections to go into action without being triggered by an approaching train. I hope it doesn’t happen often enough for people to wonder whether it means anything when the gates are down or whether they can safely go around. (hh) 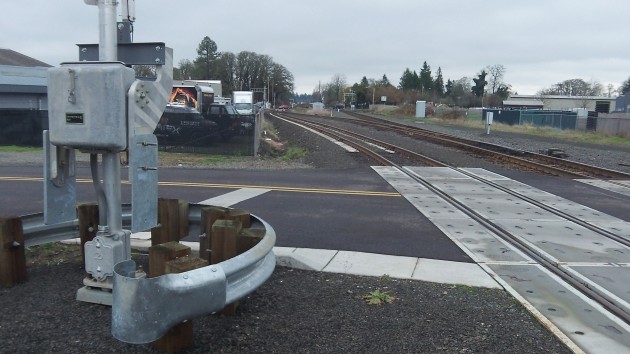 Everything back to normal after an unexplained activation of crossing gates at Main Street Tuesday afternoon.