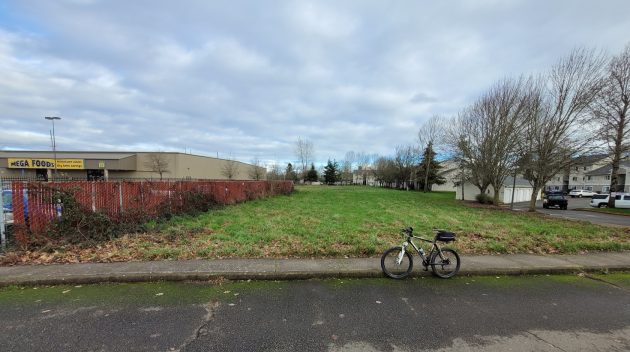 This grassy area, between the former Mega Foods on the left and the Periwinkle Creek Apartments on the right, is where 42 apartments are proposed to be built.

Owners of the former Mega Foods supermarket property are asking the City of Albany to approve dividing the 4.8-acre tract and to rezone the southern section to allow construction of 42 apartments.

The request includes the land division, a change in the comprehensive plan, the zone change, and approval of a site plan.

The Albany Planning Commission has scheduled a public hearing on the application for Jan. 23. The city council will hold a hearing and presumably take action on Feb. 22.

On Jan. 13 the city planninng staff published a 129-page staff report detailing how the proposal fares in relation to dozens of state and local planning goals and policies, not to mention many specific criteria.

(If our new governor, Tina Kotek, is serious about wanting to speed up the construction of Oregon housing, as she says, then she might start with a radical simplification of state and local land use rules.)

Reading the staff report demands the patience of Job. Imagine how the hapless planner felt who had to compile it.

The upshot of it, as far as I can make out, is that the proposal meets the numerous requirements and should be approved.

The owners of the property, including the long-vacant store, are named as Mega Investments LLC. The principals are Athwal Sona, with an address on Seven Mile Lane in Albany, and Lal Din Sidhu, of Salem.

According to Linn County tax records, Mega Investments bought the property in September 2021 for $2.5 million.

The plans on file with the city show that the proposed 42 apartments will be in two three-story buildings on the 1.5-acre lot to be divided from the rest of the parcel. There will be studios as well as one- and two-bedroom units.

The plans show 63 parking spaces, a few more than required by city rules.

Approval of the rezoning by the council, if and when it comes, doesn’t say anything about when the project gets built.

Nearby, on the other side of  Perwinkle Creek, the city approved a 107-unit apartment project  in July 2022. So far I haven’t seen any construction going on. (hh)