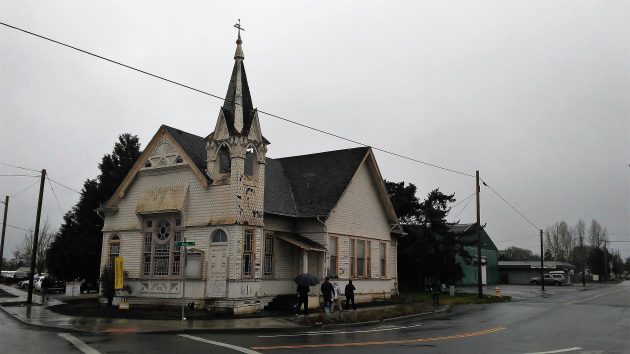 The old church at Main Street and Santiam Road.

The Albany mayor’s work group studying the future of an historic church at Main Street and Santiam Road now is looking into having the structure moved rather than fixed up in place or, presumably, demolished. That’s according to a summary of the group’s discussion Monday.

Mayor Sharon Konopa formed the group to consider both the old church and the possibility of getting the Postal Service to relocate the Albany Post Office. Monday was the group’s second meeting, and the church was on the agenda. I couldn’t make it to the noon session and asked the mayor to let me know if anything developed.

“The group met and floated many ideas,” she emailed in response. A consensus emerged to explore options of relocating the church, and also to see if there were any private parties who had an interest in moving it. “In two weeks the group will have locations and what type of uses for options to review. Also, some costs for relocating and renovating. We will meet again on the 27th.”

Besides the mayor, the group consists of Councilmen Dick Olsen and Mike Sykes; Rich Catlin and Mark Spence of the CARA (urban renewal) Advisory Board; Kerry McQuillin, Larry Preston and Bill Ryals of the Landmarks Advisory Board; and Russ Allen and Will Sheppy of the Parks and Recreation Commission.

Last week, the group got preliminary estimates that moving the city-owned former church, parts of which date from the 1890s, to a city-owned site on Water Avenue would cost $80,000. Restoring the building there and preparing the site would be another $330,000. There was no mention where the money would come from.

The work group will make a recommendation in May to the city council, where any final decision about the building rests. (hh)