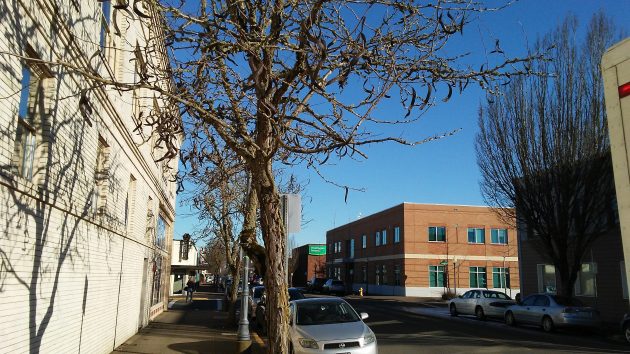 These trees on both sides of Third Avenue are among those that will be removed.

It’s possible that what starts next week will become known as the great Albany tree massacre of 2017. But in a few years the massacre may be forgotten as a whole bunch of new and — one hopes — more stately trees grace downtown streets.

City Hall announced this week that starting Wednesday, Jan. 11, about 130 street trees downtown will fall to the chainsaw in an operation that’s supposed to be finished by the end of February. City Engineer Staci Belcastro told me Friday that Buena Vista Arbor Care submitted the lowest of three quotes at $99,115 and would be awarded the contract.

The trees about to bite the dust line the sidewalks on Second Avenue between Washington and Lyon streets, Third between Ferry and Lyon, Broadalbin Street between Second and Third, and Ellsworth and Lyon streets from First to Eighth..

The tree cutting is an early phase of the streetscape improvement program for which the Central Albany Revitalization Area committed $8.4 million. It’s a project to rebuild and decorate selected downtown streets and sidewalks. The work is to be launched this spring and be completed by the fall.

Why cut the trees now, in winter? To avoid analogue possibly violating the Migratory Bird Treaty Act of 1918 as amended. That federal law, I was astonished to learn, makes it illegal to harm virtually any bird or its nest. There are more than 450 species of migratory birds in Oregon, and more than 300 of them breed in the state too. The nesting season is from about March 1 to Aug. 31.

So, rather than run the risk of finding a nest in a downtown street tree and possibly having to delay the entire project for a year in order to do studies and get federal permits to “take” a migratory bird, city officials decided to do the logging starting now and finish before the nesting season starts. That way, if they do find a nest, it’s going to be unoccupied, and there’s no complication with the Feds.

As part of the street renovation, new trees of different species will be planted. And as for the coming summer without shade-giving trees downtown, all those streets and sidewalks are going to be torn up anyway and maybe nobody will miss the trees. (hh)