Fuel bill: We’re not safe yet 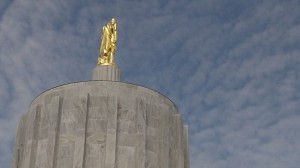 A single member’s vote in the Oregon Senate may save Oregonians from having to pay even more for fuel than we’ll have to pay anyway in coming years.

Betsy Johnson, a Democrat from Scappoose, voted with the 14 Republicans on July 6 to force a tie vote, 15-15, on Senate Bill 488, which would extend Oregon’s so-called clean fuels program. It would do that by removing the 2015 sunset date of the program, originally enacted in 2009.

Oregon already mandates that ethanol make up10 percent of fuel, which raises the price of transportation by lowering miles per gallon while also harming some small engines. The clean fuel program calls for another 10 percent reduction in the carbon content of fuel. The opponents, made up of labor, business and agriculture, among others, point out that there’s not enough alternative fuel being made. So if demand increases, the price will go up, and there may even be shortages.

Most of the Senate Democrats didn’t care about that on Saturday. Only the 14 Republicans and Senator Johnson had the average motorist and consumer in mind, which is why they voted against this bill. But you’re not safe yet. The bill is bad, but it is not dead. As long as the legislature meets, it can be revived. (hh)