Freeway life: Why semis get in front of you 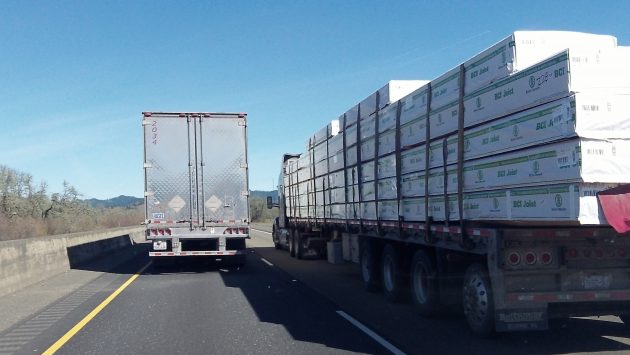 Heading north on I-5 Monday from Southern Oregon: Why truck drivers do that.

I don’t know who “Trucker Mike” is, but I’m grateful to him just the same for answers to questions like this one: Why do truckers so often insist on passing each other on the freeway, blocking cars behind them?

The answer boils down to this, in my interpretation: They’re trying to make a living, and given the facts of life behind the wheel of semis, they don’t really have a choice.

In 2017, Oregon increased the truck speed limit on most of I-5 between here and the California line to 60 mph, up from 55. I thought at the time this would help cut down on trucks passing each other with one going only slightly faster than the other one. But it still happens a lot, it seems. And it irritates drivers stuck behind a passing truck in the left lane that’s going maybe 63 or 64 mph.

“Here’s a little secret for you,” says Trucker Mike in a blog on TruckingTruth.com. “It irritates us just as much as it irritates you.”

He explains most trucks are speed-governed between 60 and 65 mph, drivers are trained to drive at a steady speed, and they try to maintain momentum to avoid wasting fuel. So if a rig going 64 comes up behind one going 62, a passing period of a certain length is inevitable. Then, suppose there’s even a small incline that slows the passing truck, so now the two rigs pretty much run side by side. The slower one could slow down more to let the other one in sooner. But getting back up to speed would take half a mile or so and burn up extra fuel.

‘Riding next to another semi is dangerous and we don’t like doing it,” Mike writes, “but sometimes the small inclines catch us by surprise and we get stuck. … Tailgating us will do no good at all. If we blow a tire, guess where the rubber is going to end up? Right on your windshield. We can’t go any faster, even though we want to.”

What about semis swinging into the left lane just ahead of cars behind them? “It’s isn’t because they are trying to prove a point to you or simply trying to be a jerk,” Mike writes. It’s because if they hit the brakes and lose momentum, it will take them a very long time and extra fuel to get up to speed again.

Mike has a suggestion: “If you see a truck approaching another vehicle at a fast closing rate, simply back off and flash your lights so he knows he can come over. You won’t lose much time out of your day, and the driver will be very appreciative. I personally love it when a ‘4-wheeler’ helps me out. As dumb as it sounds, it can sometimes make my day.”

It’s worth remembering that semis get around 5 miles to the gallon, and filling the tanks may cost up to a thousand dollars. That’s why in trucking, not wasting fuel by repeatedly having to regain lost momentum is part of the job.

Trucker Mike has sensible answers to related questions too. You can read them here. As for me, based on Mike’s advice, I’m going to be more patient and understanding on the freeway from now on. (hh)

9 responses to “Freeway life: Why semis get in front of you”