Face to face with an invader 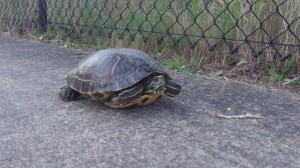 The Water Garden ponds were on the other side of the fence.

What are you supposed to do if you happen upon an invader? Kill it, probably. But it didn’t seem right in this case, and anyway I didn’t realize an invader was what I saw. Let me explain.

A few days ago, riding my bike on the Cox Creek path near the Albany and Millersburg Talking Water Gardens, I passed a couple of pedestrians and then, 50 yards on, a turtle. The turtle was pretty big, 10 or 12 inches from bow to stern. I stopped and took a picture of it. By that time the young couple on foot had caught up with the turtle and me. We assumed the creature wanted to get to the nearby ponds, so the young man lifted the bottom of the chain-link fence and shoved the turtle through to the other side.

The next day I emailed a friend for advice, and based on that and published descriptions, I’m pretty sure the animal was a red-eyed slider, considered an invasive species that is making life tough for Oregon’s native turtles. So helping this specimen under the fence might be considered aiding the enemy.

But what else should we have done? The Department of Fish and Wildlife says sliders are prohibited and it’s illegal to release one into the wild. If you have one, an ODFW fact sheet says, call the department for advice. I’ll do that next chance I get. (hh)

From Paul Rentz:  Bullfrogs also fall into that category as they’ll eat the eggs of Western Pond Turtles, our native turtles, that are fighting to come back in the valley.
The western pond turtle is a freshwater turtle species whose range extends from the Puget Sound region of Washington State south to Baja California.

Ponds, streams, lakes and wetlands provide this turtle with aquatic nesting and foraging habitat. The slow moving nature of these bodies of water makes for ample basking perches and sheltered areas for hatchlings, and allows for the growth of the aquatic plants that the turtles eat. Though they spend much of their time in the water, western pond turtles’ nests are on land and dispersal from one body of water to another takes place terrestrially. Western pond turtles are also known to spend cold winters, as well as the hotter summer months, on land. These ancient reptiles can live to be as old as 70 years old, and often don’t reproduce until they are older than ten years.

Currently listed as endangered in Washington state, the western pond turtle is present in only slightly larger numbers in Oregon. The Oregon Department of Fish and Wildlife considers it a “sensitive species,” meaning that it is a “wildlife species, subspecies, or [population] which [is] facing one or more threats to [its] populations and/or habitats.” These threats include invasive species such as bullfrogs, large-mouth bass and opossums that prey on baby turtles, and destruction of habitat from wetland draining, reduced flooding and expansion of agriculture.

Human activities have broken up turtle habitat into small patches, and as a result these turtles live in isolated populations that fall victim to inbreeding and reduced genetic diversity. Newly hatched western pond turtles are very small, so they are especially vulnerable to predators for the first 2-3 years of their lives, especially if crucial protective habitat in shallow water and on the shore is reduced. Healthy rivers and watersheds are instrumental in protecting western pond turtles’ habitat, as are roadless areas to ensure uninterrupted swaths of land that these slow-moving reptiles can disperse across.