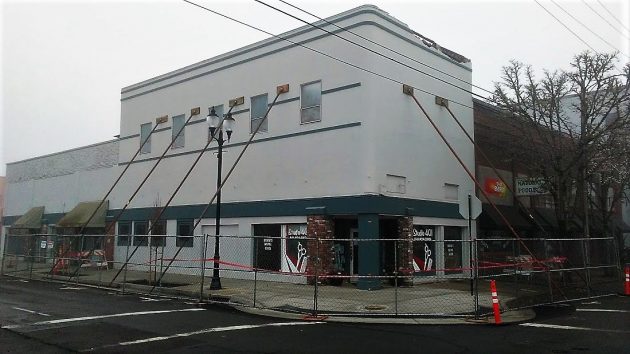 Braces have been set up to make sure the walls don’t collapse outward at the northwest corner of Second Avenue and Ferry Street.

Albany city officials are worried about the stability of a downtown historic building after its roof caved in earlier this month. The walls have been braced, and the owner is said to be working on a plan.

On Nov. 7, the hairdressers working in Studio 401, at 401 Second Ave. S.W., told their customers on Facebook that a few days before the roof had crashed to the floor above them. The three women said they had to leave but for the time being their clients could find them at nearby shops.

City Manager Peter Troedsson provided an update in his regular Friday report to the city council. There had been a further collapse of the roof and part of the top of a wall. The city had a structural engineer and architect check the walls, and the main concern was for the stability of the east wall, on Ferry. The owner, Troedsson said, was working on a plan to stabilize the walls and take off loose bricks at the top.

By Saturday, the walls had been braced on both streets, and the sidewalk was barricaded to keep people from coming to grief if something falls down. Troedsson said Gerding Builders was working with a crane company to remove the debris. The city building official, meanwhile, was requiring people to stay out of the building.

Linn County tax records show that Monteith Square, which encompasses several addresses including 401, was sold in April 2017 for $318,500. The owner is listed a Monteith Square LLC.

For the history, I checked the Albany Visitors Association’s guide to the city’s historic districts. It says there that one James Dannals started a furniture factory at the address in 1877 after he returned from the California gold fields. Then, Monteith Square was developed in 1929.

This, by the way, is the second recent case of structural failure downtown. In September 2016, part of the front wall of the Espolon restaurant on First Avenue collapsed during attempted repairs. The city gave that owner a choice of fixing the building or tearing it down. The wall was shored up, but the structure remains empty.

Let’s hope the damage at Second and Ferry can and will be fixed soon and downtown won’t end up with another wreck of a building that cannot be used. (hh)

The story drew a comment on Facebook from Matt Bennett, the renowned chef and Albany restaurateur. Here’s what he wrote: “You are correct on all of the facts in this story. We are planning on eventually moving Sybaris to the building that is attached to Salon 401. A couple of weeks ago, Tina (owner of the salon) heard a boom and that is when the ceiling started to collapse. Last Monday was when it collapsed further and the building needed to be reinforced. The City has been excellent to work with, our insurance company is in the process of reviewing the claim, and T. Gerding Construction Company is handling the repairs. As bad as the situation is, we are very thankful that no one was hurt.”