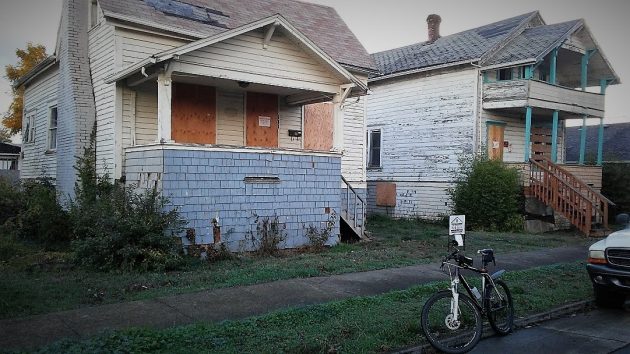 Two of the three houses, shown last fall, with a sign offering the structures for sale for one dollar.

As far as the Albany City Council was concerned, demolition could start any time now on three decrepit old houses at Fourth Avenue and Calapooia Street. But an appeal against the council’s decision is pending, and the Land Use Board of Appeal this week stayed the city’s demolition permits.

The council voted 4-2 on Oct. 10 to let the demolition go ahead in 90 days. It allowed the extra time so somebody could offer to move them, and the owners offered to sell the structures on the single tax lot for one dollar to anyone moving them by Jan. 11.

In the meantime, though, Albany resident Bernadette Niederer appealed the demolition to LUBA. And City Manager Peter Troedsson told council members in his Friday report that on Thursday, LUBA granted the petitioner’s motion to stay the demolition pending the outcome of the case. Now the petitioner has 21 days to file a brief, followed by up to another 21 days for a response.

And, according to Troedsson, LUBA has 77 days from Friday to reach a decision.

Regardless of the LUBA outcome, unless somebody does move the houses, they likely will be torn down eventually. Mark and Tina Siegner filed their application for demolition with the city last July 9. When the Landmarks Advisory Commission rejected their application in September, it said it had the authority only to delay any demolition for up to a year, but not to deny permission completely.

If that interpretation was correct, expect the vacant houses to come down on July 9 or shortly after that. (hh)