The new council dais arrangement on display Wednesday. From left are Manager Peter Troedsson, Councilors Matilda Novak and Marilyn Smith, and Mayor Alex Johnson II. Councilors Dick Olsen, Stacie Bartholomew and Bessie Johnson are out of the frame to the right.

For the first time in 16 months, the Albany City Council met in person this week, and the public was allowed in. No masks required.

People attending Wednesday’s session got their first look at improvements made in the council chambers during the Covid-19 period when meetings were conducted only remotely, online.

The dais was rearranged to demote the city manager and city attorney from the positions flanking the mayor, where these officials and their predecessors had sat for decades. Now the manager and lawyer sit to the side of the council, a step lower than the elected officials. Their table, moved to that spot, is the podium specially made a few years ago for the people addressing the council.

The arrangement allows more distance between the council members’ seats behind the raised dais.

Other improvements: New chairs for people in the audience, and a better system for broadcasting public meetings and then posting the videos to Facebook and YouTube. (That system needs a little work because some councilors’ words Wednesday could not be heard.)

What if anything happened of substance?

The main thing was that councilors went into executive session closed to the public for the annual performance review of City Manager Peter Troedsson. When it was over, they voted unanimously to give Troedsson a merit-based bump of 3.5 percent effective July 1. This brings his annual salary to $181,037.52.

The council took action on three matters I wrote about on hh-today in the past few months.

They approved abandoning the right of way for two closed pedestrian pathways near Sunrise School and two others one block over to the east. They sold a sliver of city property off Oak Street at Ninth Avenue to allow the owner of the old radio station building there to use the long-vacant property. And they sold a city-owned tax lot off Ridders Lane in North Albany to an adjacent owner who will keep it as a natural area.

Councilman Ray Kopczynski, by the way, attended remotely via Zoom from New York State, where he had driven his ancient three-cylinder Saab. He evidently made it. Now wish him luck for the drive coming back. (hh) 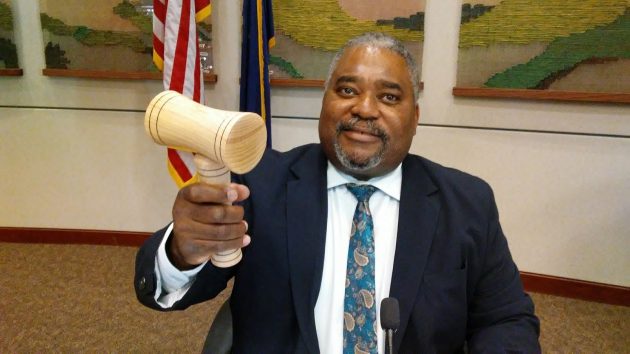 Attending his first in-person council session as Albany mayor, Alex Johnson II shows the gavel made for him by a friend in London.