Congestion on I-5: What can be done? 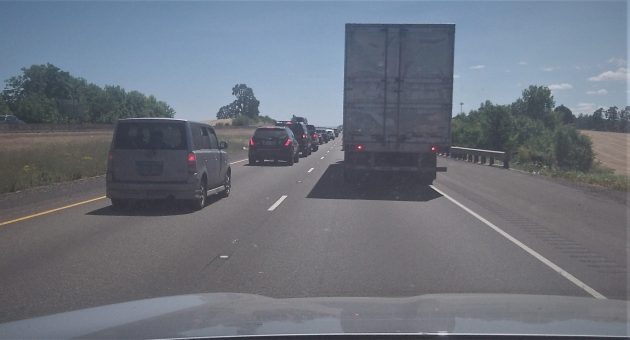 Stopped on I-5 southbound, just before the Ankeny Hill exit, on Friday afternoon.

While we’re on the topic of highways (see the previous story), here’s some gratuitous advice. If you don’t have to be on I-5 north of Albany these summer days, don’t go. The road is too full, and stop-and-go traffic in places is the result.

We found ourselves going to a funeral in Salem around mid-day Friday. The trip up was slowed by one or two slowdowns. On the way back, traffic came to a stop and we managed to get off the freeway at Ankeny Hill, getting home via Jefferson and Millersburg.

I haven’t had to go that way very much in recent years. But for several years I used to run to Portland and back every every other Friday or so. That was two decades ago, and the freeway was almost always clear with traffic moving fast.

Now it’s often bumper to bumper, according to a 2018 report in the paper. And if somebody slows down, the driver behind slows down a little more, and so on, until the lane is standing still for as long as it takes for the resumption of movement in front to work its way back.

In 2019, the average daily traffic count on I-5 just south of the Commercial Street exit was just under 71,000. It probably went down a bit during the Covid restrictions, but on Friday it sure seemed as though traffic was at its previous high or maybe higher.

Is ODOT doing anything about this? What can they do? More lanes (adding a third each way near Albany and a fourth farther north) is ruinously expensive, maybe impossible, and takes years or even decades to plan.

In the Portland area, where congestion is far worse, ODOT plans to start a toll program. If that works to reduce traffic during peak periods, maybe it would work in this part of the valley too.

Or maybe the solution lies in autonomous cars and trucks. If they all run on computers, maybe they could go faster with less space in between, and without unnecessary braking.

But that’s a long time away. In the meantime, if you don’t want to waste time on the road, don’t go north on Interstate 5 during the day. (hh)