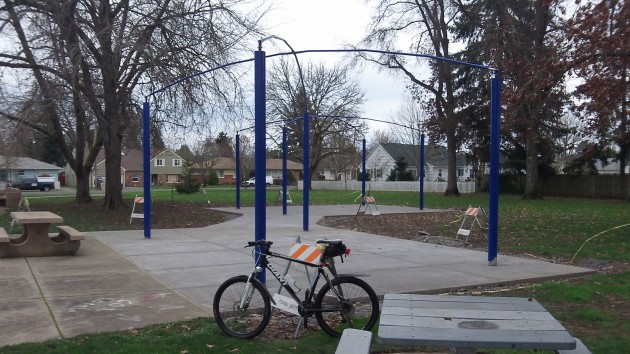 This arrangement of posts is what prompted me to wonder what it was for.

What are those new contraptions in Albany’s Takena Park, I wondered as I was riding past and saw them from the street. Four posts each, with connecting stringers at the top, like big four-poster beds.

“What you have seen is a shade structure, with permanent steel members and fabric which will be installed later in the spring,” Parks and Recreation Director Ed Hodney told me by email. “Fabric will be in place until it is removed for the rainy season.”

Two of these structures have been constructed at Takena, and similar ones are being installed in Lexington and Gibson Hill parks as well. Hodney says the project was identified in the last Parks Master Plan and in several subsequent updates of the city’s capital improvement program. At Gibson Hill and Lexington, money for the additions came from parks systems development charges, and at Takena from the parks fund itself.

I wasn’t sure about the need for more shade, especially at Takena with its many majestic trees. Hodney’s answer: “1) We removed an old shelter several years ago (unsafe) with a promise to the neighborhood that another shelter would be put in place; 2) shade from the trees doesn’t cover the playground/picnic area during the middle of the day.”