City’s vacant lot still looking for a use 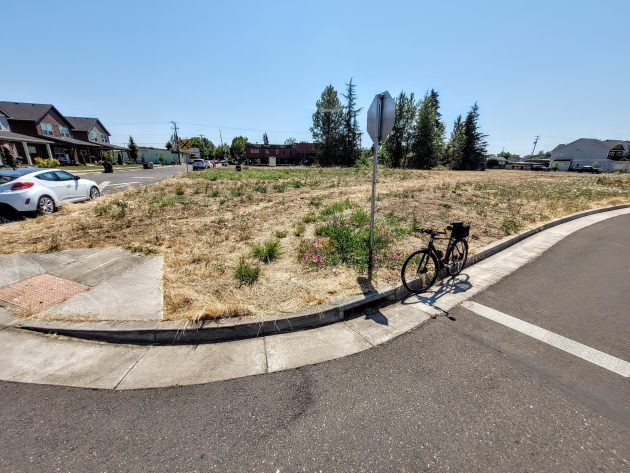 The vacant land at Edgewater Village, whose developers would like to buy the city-owned portion of it.

The developers of Edgewater Village on the Willamette River have once again told the Albany City Council they would like to buy the city-owned parcel in the middle of the 58-dwelling development.

George Diamond and his son-in-law, Vasili Rozakis, made that point as they appeared remotely during a council meeting on Aug. 8. They didn’t mention a price.

They had told the council they were interested in March, but the council didn’t react then. Edgewater Village already owns about 3,500 square feet at the corner of the vacant land, at Front Avenue and Hill Street.

Last January, the city staff proposed that the city-owned parcel of nearly one acre be declared surplus and that developers be invited to propose housing there, including “affordable housing.”

The council put off discussion of what to do with the land in January and has not taken up the issue since. At the Aug. 8 work session, there was talk that a discussion might be held at another work session soon.

The parcel used to belong to the Burlington Northern, whose Water Avenue track it borders. Albany persuaded the railroad to give the land to the city for nothing as part of the city renewing a franchise covering the portion of the rail line that runs in the middle of the street. The lot’s ownership changed in January 2014, taking it off the taxable rolls.

The Linn County assessor says the parcel has a real market value of $181,610.

Diamond said Edgewater would consider buying just half of the land and wants to build housing on it, leaving the other half in city ownership for development of a parking lot.

The off-street parking would be helpful to customers of the Calapooia Bewery restaurant across Water Avenue. It might also be useful for commercial development, if any, at the southeast corner of Hill Street and Water Avenue.

The council has sat on this vacant lot for eight years. Seems that for deciding what to do with it, that’s long enough. (hh)