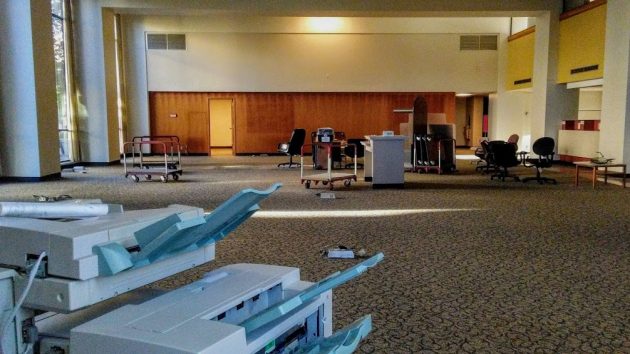 The interior of the former downtown Wells Fargo branch last year, shortly after the bank closed the branch.

Albany city officials have received a couple of competing proposals for what to do with the former Wells Fargo Bank downtown, and they are looking for more.

The CARA advisory board on Wednesday heard proposals from two teams of would-be buyers of the property at First Avenue and Broadalbin Street. Unfortunately, I’m obliged to report no details because in an unusual move, the presentations were made during an executive session closed to the public.

Afterward, once again in open session, the CARA board voted to instruct Seth Sherry, the Albany economic development director, to list the property for three weeks and bring any offers back to CARA. Councilman Dick Olsen dissented. He believes moving to dispose of the property is premature until a planned study sheds more light on downtown parking needs.

Wells Fargo closed its downtown branch in 2018, and the city bought it this Feb. 1 for $1.5 million. CARA (or ARA, the urban renewal agency, which is actually the city council) had  authorized the purchase because the property is considered a key in any downtown renewal scheme.

The Oregon public records law allows public bodies to hold closed meetings to deliberate with officials designated to negotiate real estate transactions. The exception to open meetings is intended to keep the public from being overcharged when a governmental agency wants to buy real estate for a public purpose.

In this case, the property is already in city ownership, and no negotiations are going on. Instead, interested parties have made pitches to buy the property from the city and told the CARA board, complete with architectural renderings, what they see as the options for its redevelopment.

Considering the public’s stake in what happens to the downtown renewal effort under way since 2001, you’d think the public should be able to learn what the proposals are before CARA picks one and starts negotiating the terms. (hh)