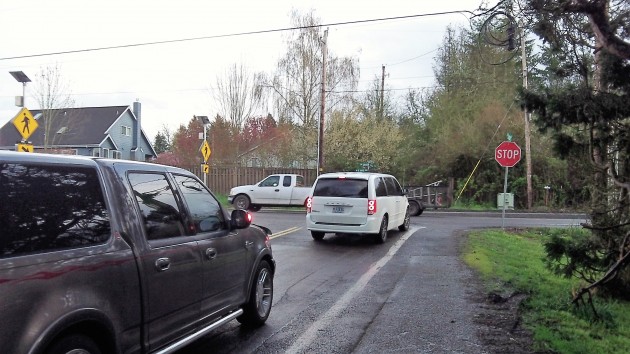 Vehicles wait on Crocker Lane before turning on Gibson Hill Road in North Albany on Monday.

Before deciding what to do about the T-intersection of Northwest Gibson Hill Road and Crocker Lane, the Albany City Council wants to hear from the public. Councilors especially want input from North Albany commuters who use those roads and sometimes get stuck at that corner for what seems — at least to them — a long time.

The council considered five alternatives at a work session Monday. Councilors didn’t go deep into the details. Instead they directed Ron Irish, the city’s transportation systems analyst, to arrange for a public meeting, perhaps in about three weeks and probably at North Albany Middle School. Irish says he also wants to put the alternatives  online and invite comments on a Facebook page similar to what the city launched last year on the reconstruction of North Albany Road.

About 1,000 vehicles go through the intersection during the afternoon peak traffic period. That’s expected to rise to 1,300 vehicles by 2040 as North Albany continues to develop.

A consulting team from David Evans and Associates, Portland, studied five ways of making the intersection handle traffic better. The cheapest is installing stop signs on Gibson Hill, making a three-way stop, with a cost estimate of $9,500. The most expensive is a signal with added turn lanes on each of the three legs of the junction, with an estimated price tag of $1,870,000.

In between on the price scale are a single-lane signal at $538,000; a modern full-fledged roundabout at $1,463,000, and a mini-roundabout at $282,000. All the dollar figures are estimates of total costs including construction, engineering, contingencies, and buying right-of-way where necessary.

The intersection is eligible for funding from transportation system development charges, the city fees charged on new construction, but the project will have to compete against other SDC-eligible street projects when the council adopts its new capital improvement plan later this spring.

Whatever is eventually done will likely slow down the morning and afternoon commutes of people using Gibson Hill, now an unencumbered through street, but make life a little easier for drivers wanting to turn left from Crocker Lane. (hh) 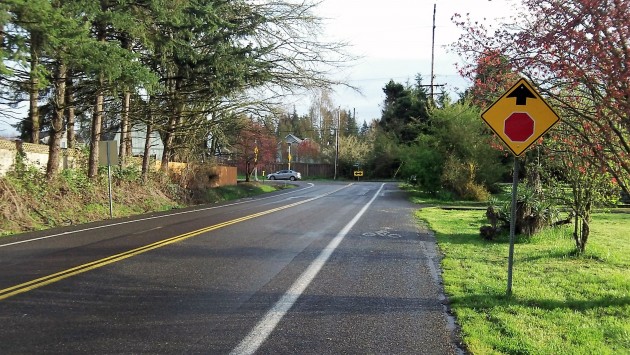 Approaching the Crocker-Gibson Hill intersection from the north.