City gets one offer for ex-Cumberland lot 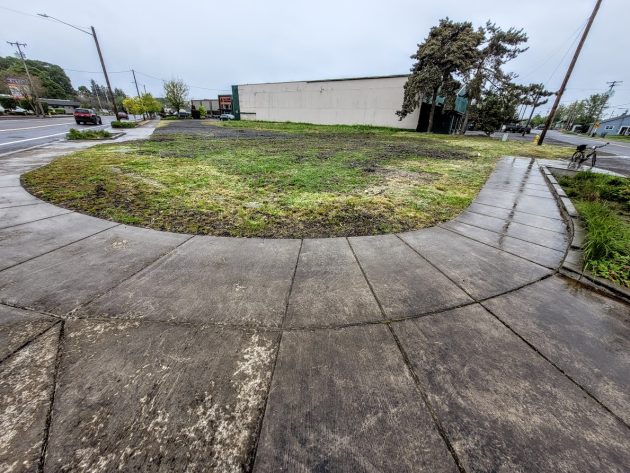 The corner of Main Street (right) and Santiam Road on Friday afternoon, in the rain.

Envision a little pocket park at this corner, with parking spaces behind it and three or four businesses in what now is the warehouse at the back.

The concept has been proposed by Yohn Baldwin, president of Baldwin General Contracting, who has offered the Albany City Council $10,000 for the city-owned lot on the corner of Main Street and Santiam Road. The Baldwin company’s headquarters is a few steps down Santiam.

The lot at 401 Main Street is where the old Cumberland Church sat for 129 years before being moved in October 2021 to Santiam and Pine Street, where a private nonprofit plans to turn it into a center for community events.

Albany declared the vacant lot of about one-quarter acre to be surplus and offered it for sale. The council received only one offer, from Baldwin, and is schedued to hold a public hearing on a possible sale on May 25.

In his May 5 letter, Baldwin said the city’s appraised value of the lot, $90,000, was too high because with existing zoning and city development standards, the only thing the site can be used for is parking. And the costs of development would make the suggested price prohibitive.

Baldwin also wrote: “As a condition (of) sale, I agree to develop the property in a manner consistent with the concept site plans included in this submission and complete construction by 9-30-2022.”

The proposed site plan shows 17 parking slots in the space where the church formerly sat. It shows landscaping and other improvements along both Main and Santiam, and a pocket park accessible to the public where the streets come to a point.

“By accepting our offer,” Baldwin wrote, “the community will benefit from Main Street improvements to city standards along the frontage of the properties, a site amenity of some sort on the corner of Main Street and Santiam, improved traffic flow resulting from the elimination of curb cuts on the property, a fresh new streetscape, an increase in property value, and property tax income in perpetuity.”

The city acquired the former church property in 2000 for $150,000 to accommodate a street project. But then the design of the project was changed and the property was not needed after all. (hh) 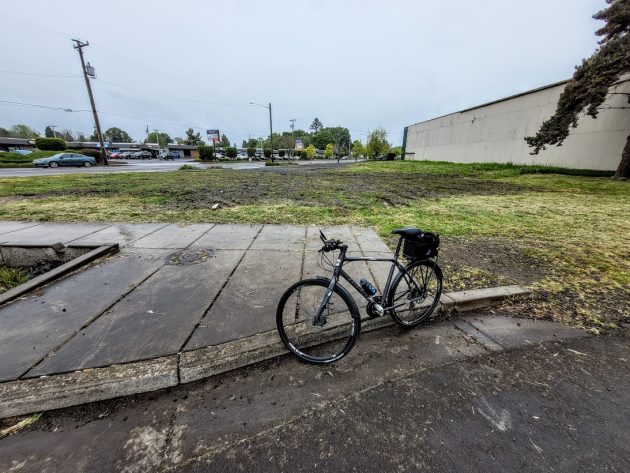 Looking at the vacant lot from Main Street. The Carriage House Plaza is in the background.


11 responses to “City gets one offer for ex-Cumberland lot”