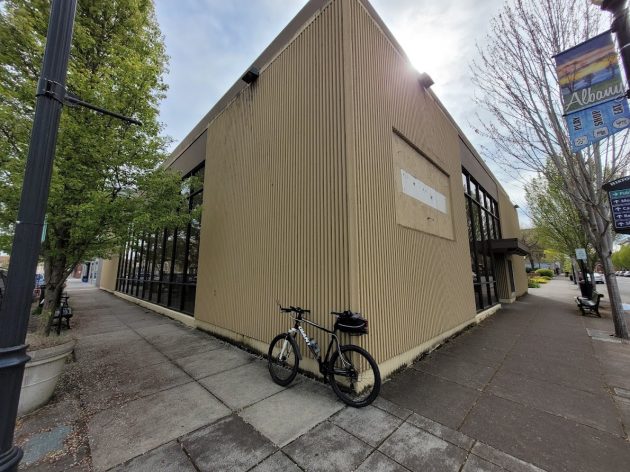 The former Wells Fargo bank in downtown Albany is to be demolished and the site offered for sale to a developer who would build apartments.

That’s according to the city’s urban renewal (CARA) advisory group, which met Wednesday for the first time since October 2021.

The group consists of the city council and seven others. Some of the members attended the meeting at City Hall in person. Others took part remotely via Zoom.

Most of the members voted for a motion to recommend that the city obtain a cost estimate for the demolition and develop a timeline for the project, which the Albany Revitalization Agency (the city council) presumably will review at a future meeting,

Councilman Ray Kopczynski voted “no” because this is a waste of time, considering that the group already favors the demolition-and-sale option and getting an estimate of demolition costs is an obvious first step.

Wells Fargo closed the branch at First Avenue and Broadalbin Street in the summer of 2018. The city of Albany bought the property for $1.5 million in February 2019.

In May 2021, the ARA/council agreed to lend Gerding Builders $900,000 to buy the property and to grant the company $2 million toward the estimated $10 million it would cost to redevelop the vacant bank as a business and residential building. This April Gerding backed out because the project was no longer economical.

The staff told the CARA board that $2 million was still allocated to the Wells Fargo project. But including the loan that did not need to be made, you’d think the amount would be $2.9 million.

There was talk to the effect that whoever buys the site for development of downtown housing might want or get some CARA aid, so money set aside for Wells Fargo project might still be needed.

CARA projects typically move very slowly, partly because of the leisurely pace of one month between ARA meetings. So if and when the old bank will bite the dust, let alone when something new will be built on the site, is anybody’s guess. (hh)