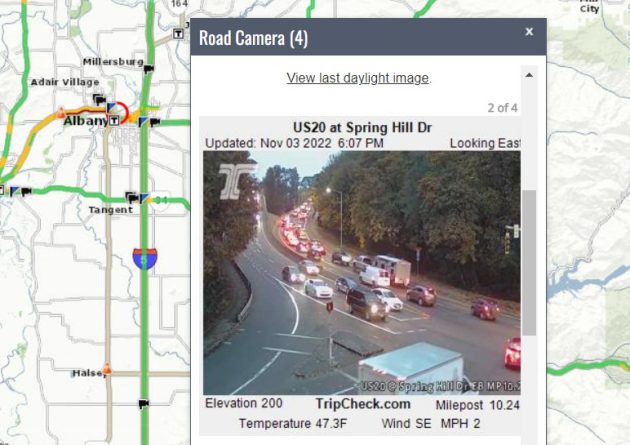 Thursday night was one of those occasions where the new road cameras at Highway 20 and Spring Hill Drive might have been helpful — if drivers had looked at them before setting out.

ODOT installed the set of three cameras last February as part of its Trip Check program to keep an eye on potential weather problems in the winters to come.

One camera looks west at Highway 20, another south at the approach to the Ellsworth Street Bridge. The third is pointed at Spring Hill traffic approaching the intersection from the north.

In recent years, afternoon and evening traffic has often become congested as the number of commuters and others overwhelms this single gateway to downtown Albany from Benton County.

This was the case on Thursday afternoon and evening, leading to long lines of stop-and-go traffic on Highway 20 as well as North Albany Road and Spring Hill Drive.

But it doesn’t happen every weekday. Some afternoons, there’s not much of a problem at all.

So drivers heading into Albany after 4 p.m. on weekdays might do themselves a favor by checking the  Trip Check camera before they start out. If traffic looks bad, they can wait around half an hour or so and avoid the mess. (hh)

Nothing but headlights as traffic is stalled on Highway 20 approaching the bridge Thursday evening.