Calapooia Court not yet in the clear 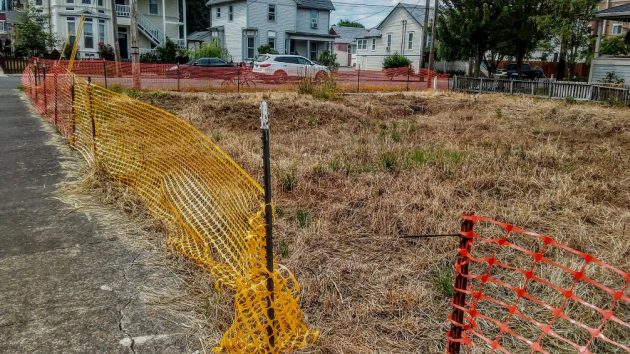 The lot at Fourth and Calapooia remains vacant while the land-use approval process unfolds.

Calapooia Court, the plan for two buildings in Albany’s Monteith Historic District, has cleared one hurdle but is not yet approved for construction.

The Albany Landmarks Commission rejected the project as too big and too tall for the neighborhood on May 19. The property owners, Mark and Tina Siegner, appealed to the city council. The council overturned Landmarks and approved the application on June 24.

On Wednesday night the council voted 5-1, with Dick Olsen opposed, to adopt findings to back up its approval of the project, and the city’s planning division mailed a “notice of decision” in the case the following day, Thursday.

This mailing starts a 21-day period during which people who participated in the hearings may appeal the council decision to the state Land Use Board of Appeals. The last day to file an appeal is July 30.

Friends of Historic Albany, sharply critical of the project and of the council’s handling of the case, said on its Facebook page it was considering how to proceed.

In addition, the planning staff said the project also needs approval of a site plan before the owners can apply for a building permit. The city said earlier that a site plan had been submitted, but how or when the review was being handled was not clear.

One of these days construction on that corner may start. But clearly it won’t be right away. (hh)

Architect Bill Ryals’ vision of the two buildings proposed at Calapooia and Fourth.


7 responses to “Calapooia Court not yet in the clear”