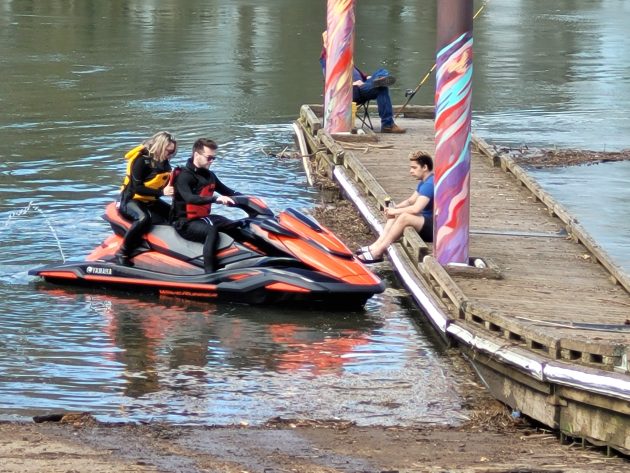 The upstream side of the floating dock at Bowman Park was clear enough for boaters to use Tuesday afternoon.

I didn’t know it at the time, but when I reported on the big buildup of debris at the Bowman Park dock last Friday, the job of clearing the mess had already been scheduled by the Albany parks maintenance crew.

And when I made another stop at the park this afternoon, the floating mass of logs, driftwood and trash was gone.

“The removal of the debris on the upriver side of the Bowman dock is a regular winter and spring chore,” Rick Barnett, the parks and facilities maintenance manager, told me by email this morning. “It was already on this week’s work list when I read your column, so unless something unusual happens it should be taken care of by the end of the week.”

Well, as it turned out, it was taken care of far sooner than that.

The river, though, seems not quite done with bringing down more debris. Looks like sooner or later that clearing job will need doing again. (hh)


One response to “Bowman dock cleared of debris, for now”