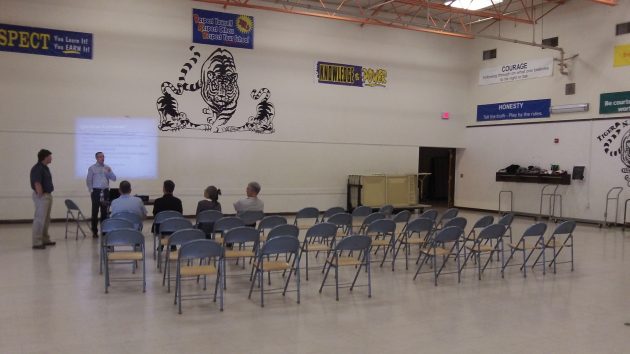 Road maintenance may not be the sexiest subject. Still, the handful of citizens who showed up for Thursday night’s “community event and open house” on Benton County transportation came away with useful things to know.

The main thing is that Benton County has plans for several road projects affecting North Albany residents and commuters, including bicycle riders.

One is that this summer and next, a stretch of Independence Highway from the railroad tracks north will get an asphalt overlay and some additional width to accommodate bike lanes. A couple of segments will be done this summer, and the part in between is scheduled for next year. As part of that job the county plans to improve sight lines at the T-junction of Ryals Avenue and Independence, where the topography now keeps drivers from seeing approaching cars.

Also set this summer: An asphalt overlay of Robin Hood Drive in North Albany, plus a bridge replacement and several other pavement overlays in other parts of the county.

Among more than a dozen projects countywide for 2017 or ’18, Benton has plans to reconstruct Gibson Hill Road and Crocker Lane before turning jurisdiction over to the city of Albany. Also under design for that time frame is the widening of sections of Oak Grove, Metge and Ryals, to go along with the work on Independence. There are virtually no shoulders on those roads, and cyclists necessarily ride in the traffic lane. Public Works Director Josh Wheeler says the idea is to provide a safer bike connection between the Albany and Corvallis areas, even though it’s not a straight shot.

Two North Albany streets, Meadowwood and Grandview, are to get chip seal treatments in 2017-18.

All of it depends on the availability of funds. A brochure I picked up at the open house says Benton County gets a little more than $4 million a year from the state gas tax. Property taxes can’t be used for road maintenance, but the commissioners have dedicated $750,000 from other general fund sources to step up chip-sealing county roads.

There’s lots and lots more to the Benton road program, which covers 270 miles of paved and 170 miles of gravel roads. If you have questions, call Road Maintenance Manager Jim Stouder at 541-766-6821 or go to www.co.benton.or.us/publicworks. (hh)