Back on council agenda: portable toilets 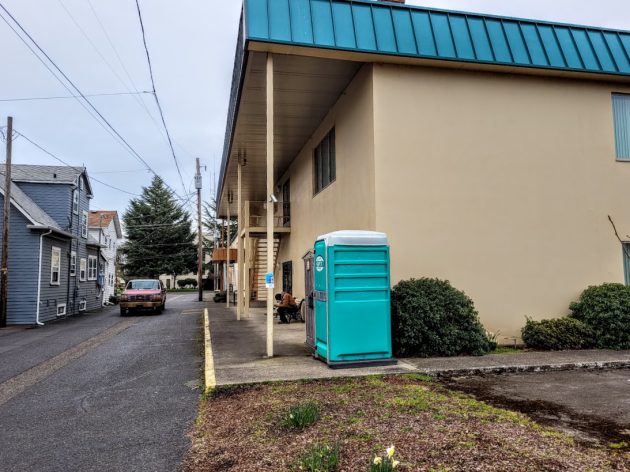 Once again, portable toilets are on the agenda of the Albany City Council. And if the council wants to keep allowing the one that sits outside the First Christian Church downtown, it may have to change the municipal code.

The congregation offers a free community meal on Thursday nights, with people picking up take-out food from tables outside. In 2018 the church placed a portable toilet on the back corner of its building after human waste was becoming a problem on the grounds, which include a preschool.

The city code, though, prohibits portable toilets except at construction sites and special events, and then only temporarily. After several discussions, the council agreed to make an exception for the church, and the city issued First Christian a permit in November 2019.

The church has asked for the permit to be renewed. But in the meantime, city staff concluded that the municipal code doesn’t allow permits like this after all.

They discovered a council resolution on the subject from 1982. And that language, according to the staff, authorized one-year permits not to connect to the sewer system only to give homeowners more time to change from septic tanks to the city sewer system.

So now what? In a memo to the council for the regular meeting on Wednesday, March 23, Public Works Director Chris Bailey suggests that council members consider amending the code if they believe changes are warranted.

Such an amendment presumably would cover not just the case of First Christian Church but also include coffee kiosks set up in Albany parking lots. Last September, the city ordered at least one such business to get rid of its portable privy, which was for use by employees, not the public.

The code change should also spell out why portable toilets are allowed in city parks, even where sewer connections are available or could be constructed. You’d think that a prohibition on something for the sake of “public peace, morals and safety” (the title of the relevant section in the code) would treat public and private property the same. (hh)


11 responses to “Back on council agenda: portable toilets”