At Oak Grove, a big tank and bigger hole 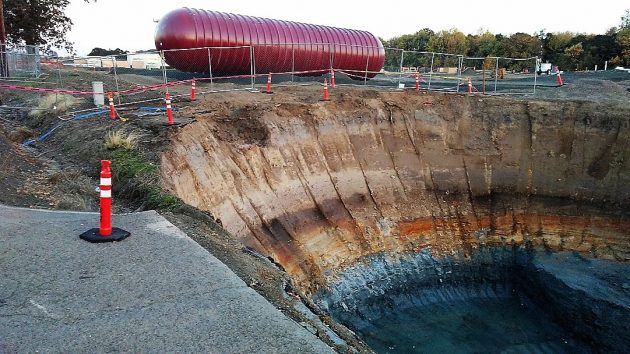 On Sunday, a giant tank sat by the side of an even bigger excavation at the Oak Grove School construction site.

The sight of a mammoth tank at the Oak Grove School construction site in North Albany made me wonder what it’s for. I got the answer, but I’m still amazed at the varied and apparently ancient geology revealed by a huge excavation on the site.

The tank holds 25,000 gallons, according to its label. It was made by ZCL Xerxes, a Canadian company with several manufacturing plants in the United States. The company says it’s the largest maker of fiberglass underground storage tanks in the world.

This particular tank is intended to hold wastewater generated at the new school, which lies outside the Albany city limits. After Albany built a sewer system in the part of North Albany annexed to the city in June 1991, the school district laid a pipe from Oak Grove School to hook up to the new sewer in Scenic Drive, about a quarter-mile away.

The pipe, however, is not big enough to handle the load from the new and bigger school. The solution? The big tank, which will hold the school’s wastewater for the time it takes to pump it to the city sewer.

Oak Grove enrolled about 290 last school year. The old buildings have been demolished and are being replaced by a new school with a two-story classroom wing that will have room for up to 500 pupils.

At an estimated cost of $26 million, Oak Grove is part of the Greater Albany School District’s $187 million program to build one new school (Meadow Ridge), replace Oak Grove, and remodel and enlarge South and West high schools, among many other projects.

At Oak Grove, Gerding Builders of Corvallis is the general contractor. Passersby on Oak Grove Drive have a close-up view of the project and report that the construction seems to be making good progress toward the goal of opening the new school in time for the 2019-20 year.

As for that deep excavation, I was intrigued by the coloring of the different layers of soil. Judging by various online sources on the geology of eastern Benton County, they are mostly clay. And if I read them right, the blue layer at the bottom may have been deposited close to 2 million years ago. (hh) 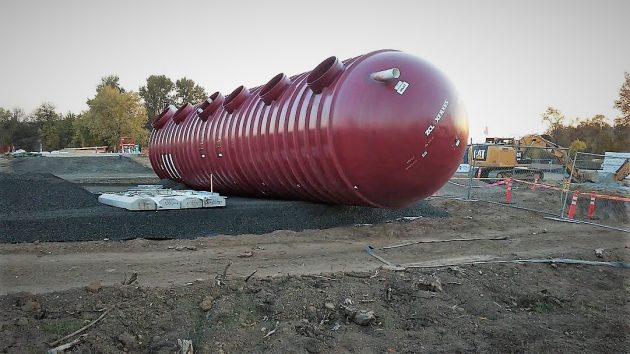 The tank the way it looked Sunday from the construction fence on Oak Grove Drive.


7 responses to “At Oak Grove, a big tank and bigger hole”