As of Dec. 8, buying a gun looks impossible 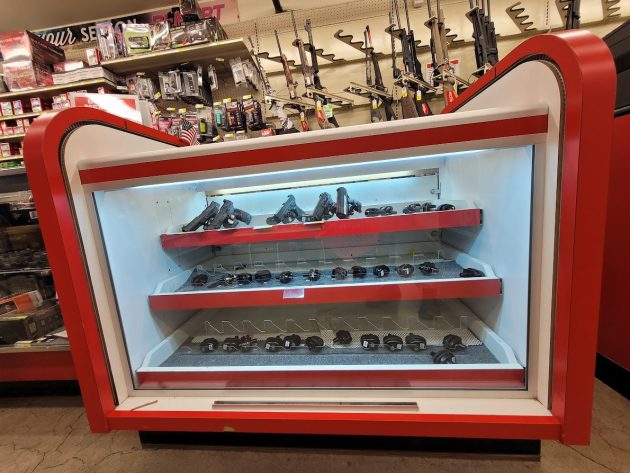 At the Albany Bi-Mart, only five pistols remained in this display case on Saturday afternoon, a sign of a surge in gun buying before it becomes hard or impossible.

Unless a court intervenes before Measure 114 takes effect on Dec. 8, it looks like after that date private citizens will no longer be allowed to buy a firearm in Oregon for a good long while. But the promoters of the initiative didn’t mention that.

The measure was sold as a “common sense” safety law. It requires a police permit before you can buy a firearm, and to get a permit you have to prove you know how to use a gun. What’s wrong with that?

Local police and sheriffs do not “certify” instructors for the general public. Nor do they offer public firearms training. Linn-Benton Community College doesn’t offer such training either. Maybe some private gun ranges or self-defense instructors do, but they are not “certified by a law enforcement agency.”

The State Police say they are working on administrative rules to carry out the new statute. But whenever the rules are adopted, they presumably can’t change the plain wording of the law.

So, the training courses required to get a gun-buying permit do not exist. Will they ever? Maybe eventually, but only after individual law enforcement agencies decide they have the time and money and want to take the risk to train and then certify public firearms instructors.

This is not likely to happen. And if it does, it would take a year or more to get going. And then would-be gun buyers would have to apply for the training and wait to get in — maybe another few months or a year.

In the meantime, gun sales to the general public in Oregon will have to stop. Any remaining federally licensed retailers of firearms will go out of business. That will make a temporary ban on gun sales permanent.

That, presumably, is what the promoters of Measure 114 had in mind. But that’s not what they said. (hh)