And the point of this is what? 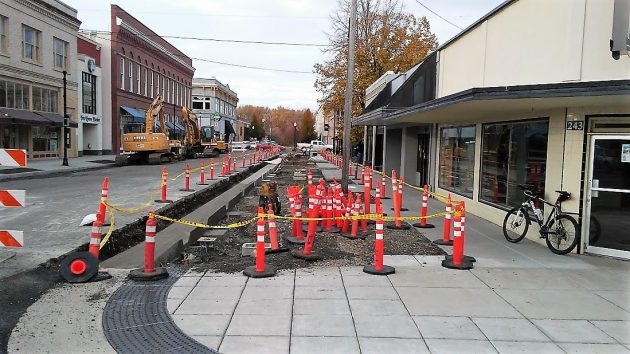 Looking north on Broadalbin Street from he corner of Third Avenue on Monday, Nov. 13.

This is one element of Albany’s $8.4 million downtown streetscape project that may have people scratching their heads and wondering about the point.

It extends to Broadalbin Street between Second and Third the “promenade” concept first applied some years ago to the block of Broadalbin between First and Second. Parking on the east side of the street is gone, replaced by a wider sidewalk and landscaped holes to catch rainwater.

On the promenade block between First and Second there are retail storefronts, where pedestrians strolling along the widened sidewalk can presumably be fascinated by merchandise in the windows There also is a fine restaurant where diners can sit outside during the few times of the year when it’s not too cold, too hot or too wet.

What about this block being rebuilt now? There’s the vacant retail suite on the corner, then the state Department of Geology and Mineral Industries, then a couple of office-type businesses, and then the shuttered public restrooms of the old post office building that later served as city hall, and finally the west wall of the building itself. Not exactly a hot spot for casual strolling and seeing the downtown sights.

Things don’t have to stay the way they are, of course. Maybe the owner of the corner storefront will find merchants who make a go of it in that space. Maybe the demand for retail will explode to such an extent that DOGAMI and the other offices will be replaced by tenants that get lots of foot traffic. And maybe the local development company that owns the old city hall can figure out something to do with that old pile, something that customers will want to visit or see. Maybe.

If it happens, great. If not, all you have is a wider sidewalk on which nobody walks, and the loss of four parking spaces on the street. (hh) 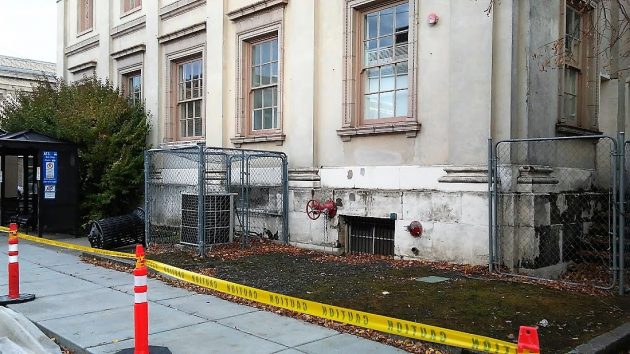 The former city hall’s west side fronts on the Broadalbin Street beautification project.