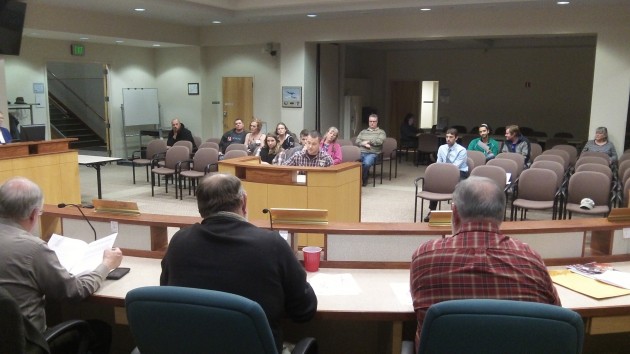 Sparse crowd may mean people have given up trying to sway the council on grass.

Like it or not, marijuana regulation will remain on Albany’s agenda for public discussion for another year thanks to a 4-3 vote the city council took Monday night. Mayor Sharon Konopa broke a 3-3 council tie and voted in favor of banning recreational marijuana facilities including retail shops in the city.

The vote was to have the city attorney’s office draft an ordinance to enact the ban. The council plans to vote on the ordinance for the first time Dec. 2 and — unless one of the four yes voters’ mind is changed, an unlikely event — adopt it two weeks later. (The ban does not affect the handful of medical weed dispensaries in Albany; they can keep going unless they violate some city law.)

The ban will automatically go to the city voters in the 2016 general election. If voters uphold it, that will be the end of it. In case they overturn it, though, the council during the next year plans to consider and enact limitations on the place, time and manner of marijuana operations, which then could be licensed by the state after November 2016.

As expected, council members Rich Kellum, Floyd Collins and Bessie Johnson favored the ban, while Ray Kopczynski, Dick Olsen and Bill Coburn opposed it. There was some confusing discussion about taxes and whether, having banned recreational sales, the city would forfeit any share of state taxes collected on such sales elsewhere, but it sounded as though the city’s share wouldn’t amount to much anyway.

The council had the choice of several other options but did not pick them. It did not, for example, rescind a previously enacted ban on recreational grass sales by medical marijuana dispensaries.

If they don’t want to wait a year to try to overturn the ban, marijuana advocates could try to refer the ordinance once the council enacts it next month, but only if the council adopts it without an emergency clause. Kellum has been vocal in opposing such clauses when no actual emergency exists. It will be interesting to see what he says about this one when it comes up.