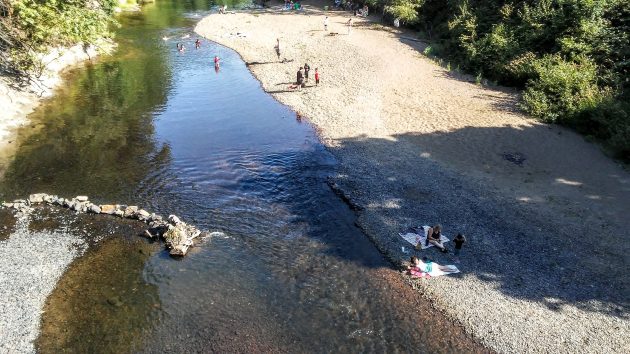 Saturday afternoon on the Calapooia River just upstream of the Queen Avenue bridge.

On social media, I’ve seen questions along the lines of: “Where can we go swimming this summer?” By now these people new to the Albany area no doubt  have figured it out, but if not, here’s a suggestion or two.

One popular swimming hole and sunbathing beach is the one shown in the lead photo. It’s on the Calapooia, which has been reduced to little more than a creek at this time of year without much rain.

It’s near where Queen Avenue crosses the river. Best way to get there is on foot. If you have to drive, you’ll have to park on the shoulder of Queen south of the bridge, or in the bike lane north of it. Then find your way underneath the bridge and to the beach below.

Another popular place is near the boat ramp at Bowman Park, as you can see below: 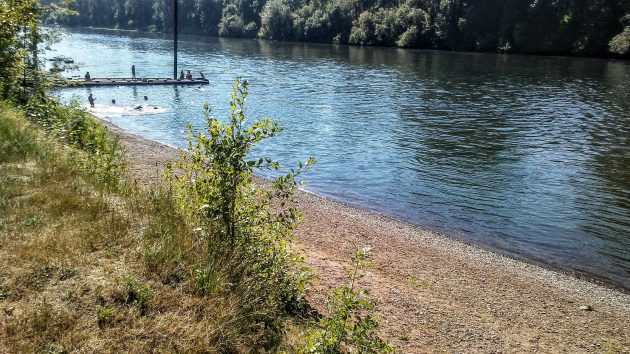 As low water, like now, there’s a big wide gravel beach downstream from the ramp. But for some reason people seem to like to hang near the ramp, probably because if you’re under a certain age it’s fun to jump off the floating dock.

Bowman is the easiest to get to because it’s a park and has a big parking lot.

Takena Landing is another possibility, on the other side of the Willamette. You can park there, then walk under the Lyon Street bridge and find your way on to the long gravel bar.

And of course there’s Byrant Park, where you can dip your toes into either the Calapooia or the Willamette, or both. But everybody knows about that. (hh)


2 responses to “Albany swimming holes? Not hard to find”