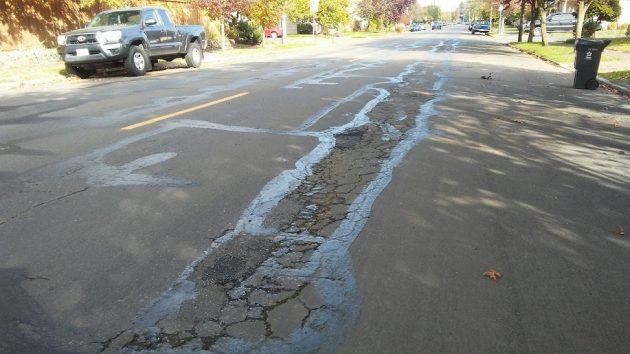 Sections of six main streets have been been proposed for reconstruction if Albany voters approve a general-obligation bond issue. But expecting to ask voters for other fee or tax increases in 2020, the city council has put off for now any consideration of a street bond.

The bond question came up before the council in August and again last week. Nothing was decided, except to postpone any decision indefinitely. Councilors did say that if and when a street bond is considered, it should include enough money to replace water and sewer lines in addition to the pavement.

In May 2020, Albany voters likely will be asked either to renew (a year before it expires) a special five-year tax levy for police and fire protection at the present rate of $1.15 per thousand dollars of taxable value, or to raise the rate by 10 or 20 cents. Mayor Sharon Konopa prefers renewing it at the same rate, with less need for a campaign, but is pushing for a monthly utility fee to augment funding of police, fire and maybe other programs. But a majority of councilors have said or hinted they would not approve a fee on their own, without the voters’ OK.

With all that going on, the council was in no mood to ask voters to approve a street bond, which would raise property taxes anywhere from 23 to 36 cents per thousand.

The streets proposed by the public works staff to be reconstructed are segments of six arterial or collector streets, totaling nearly two miles: Third Avenue from Vine to Washington Street, Ninth from Elm to Washington, one-block Albany Avenue, and three streets in the city’s central shopping area: 14th Avenue from Geary to Waverly, Clay from 14th to Santiam Highway, and Waverly from Santiam to Queen.

Councilor Bessie Johnson thought the selection “odd.” Indeed, to the casual observer, those segments don’t appear to be in urgent need of reconstruction. The exception is Ninth, where broken pavement is plain to see.

Depending on various options — whether to add the water and sewer work, and whether to leave out Third or both Third and Ninth — the city staff estimated the amount of the proposed bond issue to range from $16 million to more than $25 million.

Chances are the cost estimates and proposed bond amounts will have changed if the council ever decides to put a package of street projects on the ballot. When that might be, nobody knows. All we know is that it won’t be now. (hh) 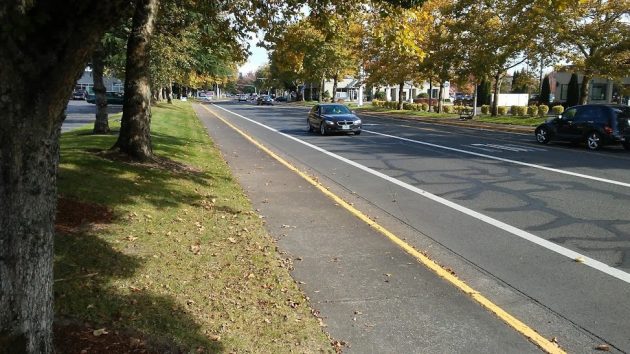 Except for the cracks filled with tar, the pavement on 14th Avenue looks pretty good.